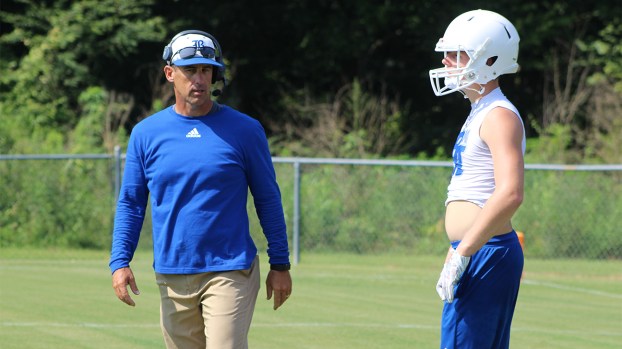 Daily Leader file photo / Ron Rushing has resigned as head football coach at Brookhaven Academy. He will take on the head coaching position at Parklane Academy in McComb.

Brookhaven Academy is looking for a new head football coach after Ron Rushing announced his resignation from the position last week to accept the same job at Parklane Academy.

Rushing just completed his fifth season at BA where he finished with a 34-27 overall record.

Prior to being hired at Brookhaven, Rushing was the head coach for six seasons at Cathedral School in Natchez.

There he won the 2014 MHSAA 1A state title while leading the Green Wave to a cumulative record of 60-17.

He inherited a program that had lost 14 straight games under previous coach Blake Purvis. Purvis lasted two seasons at the school.

In Rushing’s first season at BA, the Cougars went 0-8 to start the season and then had to forfeit their final two games after not having enough healthy players to compete.

That 25-game losing streak was broken when the Cougars beat Trinity 41-40 in the second game of the 2017 season.

The 2017 team finished 9-3 before being eliminated in the playoffs by Centreville Academy. The next season the Cougars were 9-4 and lost to eventual state champs Greenville-St. Joe in the state semifinals.

The Cougars last won a state championship in 2012 under coach Tripp McCarty. McCarty then left the school for a job at Pillow after coaching the Cougars for three years.

Rushing’s five season tenure at the school is the longest for a BA coach since Ray Ishee led the Cougars from 2001-2005.

Ishee was replaced by Bo Milton who stayed at the school for two years before being hired away by Parklane Academy.

BA alumnus and current Madison-Ridgeland Academy head coach Herbert Davis was hired for his second stint at the school to replace Milton. Davis coached the Cougars for three years and went 35-6 with one state championship during that time.

Parklane has gone through a similar cycle of coaching changes as of late, as Rushing is replacing Brian Stutzman who led the Pioneers for six years.

Long-time Parklane head coach Charlie Newlon retired after the 2007 season, which was his 26th at the school in McComb.

Rushing also served as athletic director for BA. His last day at the school was Friday according to a letter posted on social media by BA.

Parklane competes in the 6A classification of MAIS athletics as the Pioneers are one of the six largest schools in the association.

Loyd Star and West Lincoln each win one in soccer matchup

While Loyd Star and West Lincoln were meeting inside the gym Tuesday for hoops, the same rivalry was also being... read more