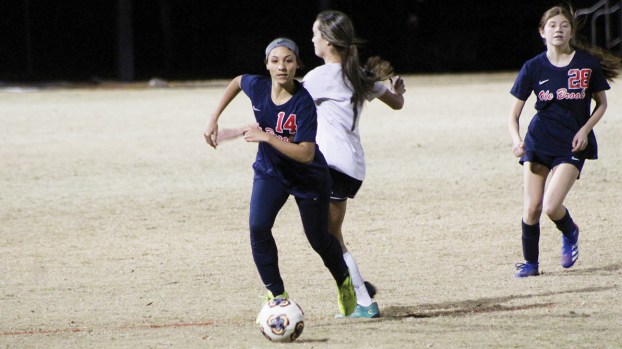 Photo by Cliff Furr Sophomore Ramie Stovall works the ball up the sideline Tuesday for Brookhaven High in their 1-0 win over Lawrence County.

A goal by junior Leyton Roberson with less than 10 minutes remaining in regulation proved to be the winner for the Brookhaven High girls’ soccer team Tuesday in a 1-0 win over visiting Lawrence County.

Roberson collected an errant LC pass near midfield and controlled her run past the stabbing legs of three different Lady Cougar defenders.

She gathered herself and put forth a hard, low kick to the corner of the goal on the north end of King Field.

There was a cheer that felt something like relief from the fans bundled against the frigid weather as BHS finally got a goal after controlling the action most of the night.

Roberson had made similar runs in the game, but one that led to an apparent goal was called back due to an offside penalty.

The win was the third straight for the team and first-year coach Dustin Bairfield.

“Really happy for the girls to get the win tonight,” said Bairfield. “This was our first game in a month, and we executed better as the game went on.”

Bairfield is assisted by Alex Hamilton and Aaron Ayers.

Sophomore goalkeeper Maelee Thibodeaux didn’t face much offense from Lawrence County as Brookhaven controlled the action at the midfield.

BHS starting mid Morgan Moak is one of two seniors on the team along with defender Taylor Levy. The two are co-captains and both were successful in keeping action on the LC half of the field for most of the night.

Getting the ball forward while under control to offensive threats like Roberson, Caroline Kilpatrick and Maryanna Boyte came with controlled passing which is something that makes Bairfield happy.

“Making passes to move the ball and not just kicking it long and hoping something good happens — that’s the thing that we’ve worked hardest on improving this season,” said Bairfield. “We’re a young team and have been showing improvement each time out.”

Tuesday night, the Brookhaven High boys’ soccer team looked to be in control early against Lawrence County — and then... read more