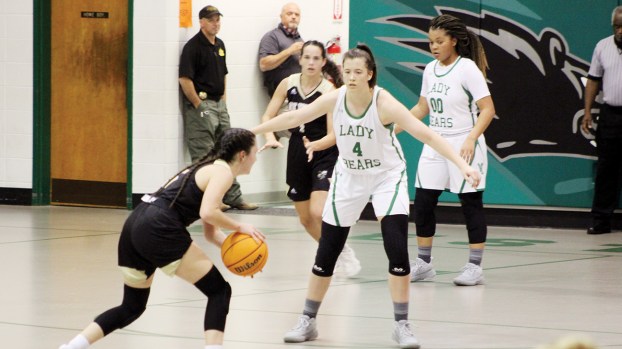 MAIS member school Oak Forest Academy hails from Amite City, Louisiana, and Tuesday night they found something out that most local schools already know — nobody shoots the ball better in their home barn than the West Lincoln Lady Bears.

The Lady Bears (2-0) buried their private school competitors under a barrage of early 3-pointers on the way to a 53-26 win.

“Stop letting them shoot threes,” yelled an Oak Forest dad from the top of the bleachers in the second quarter.

Well, dad — it wasn’t like Oak Forest wasn’t trying, but there are some nights where the hoop in Jack Case Gymnasium looks as wide as Lake Lincoln to the Lady Bears.

The best example of what kind of night it was for the home team came on 3-pointer by sophomore Mary Claire Johnson late in the first half.

Shooting on the western goal closest to the concession stand, Johnson put up a shot that hit the rim and bounced four feet in the air, appearing ready to fall outside the cylinder with one more bounce.

That didn’t happen though, as the basketball reacted like it was pulled by a magnet, falling backwards into the hoop. At that point even helpful bleacher dad from OFA could only throw his hands up and shrug.

Oak Forest went to a man-to-man defense in the second half and slowed the pace of things down — only being outscored 9-6 in the third quarter — as both coaches were able to give every member of their team playing time in the final period.

“We kind of relaxed in the third quarter and we’ve got to have better execution,” said WL coach Brooks Smith. “That’s a teachable moment, though. I was very pleased with how we played in the first two quarters. We really shared the ball.”

It’s a different team for West Lincoln this season as the graduation of Bailey Wilson and Paige Shedd meant the loss of two of their tallest forwards.

They’ve still got do-it all senior forward Brittany Sturkey to lead the team in scoring and rebounding.

Last season, Sturkey was a Daily Leader All-Area selection after averaging 16.5 points and 4.7 rebounds per game for a team that went 10-0 in region play, won the county tournament and made the third round of the MHSAA 2A playoffs.

Sturkey went off for 26 points in the season opening win over Madison-St. Joe last week while Addison added 17 points in the victory.

Johnson finished with 11 points off the bench as she hit three 3-pointers before halftime.

Sturkey and Addison are joined in the first five by a pair of forwards and returning starters in senior Mya Brown and sophomore Ta’Kyla Brothern. Senior Jena Hughes is a first-year starter as a guard.

Hughes scored five points against Oak Forest while Brothern and Brown chipped in four points each.

Addison, Brothern and Johnson are part of the large sophomore class that makes up nearly half of the WL roster. That group had great success in junior high and plays an unselfish brand of basketball.

The other sophomores for Smith include Ramsey Hall, Mailey Kate Young and Madilyn Case.

Forward Abby Jackson was the first sub off the bench Tuesday. The only junior on the team — Jackson provides height off the bench for the Lady Bears inside.

Young and Jackson rounded out the West Lincoln scoring with two points each Tuesday.

The WL roster also features the freshmen trio of Preslee Rushing, Alexis Johnson and La’Sadria Stewart who all saw action against OFA in the final quarter.

West Lincoln is scheduled to next host a home game on Dec. 14 against Mississippi School for the Deaf.

Yellowjackets’ size too much for the Bears to handle

A larger Oak Forest Academy team got buckets close to the basket Tuesday in Jack Case Gymnasium while the homestanding... read more