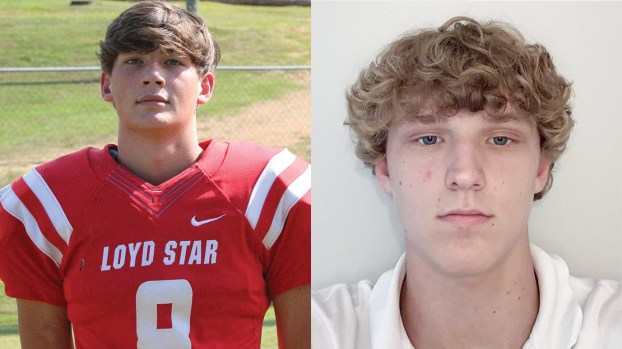 LS’s Walker, BA’s Johnson are The Daily Leader’s Players of the Week

A Hornet and a Cougar take the first spots in The Daily Leader’s 2020 Football Players of the Week.

Leader of the Hornet D — Walker is DPOW

Loyd Star junior Brantley Walker checks in at 6-foot-1, 190-pounds. Broad shouldered with long arms and legs, Walker looks even larger than that when he straps on the pads for the Hornets.

A linebacker, Walker came up big for his team Friday night in a 40-16 win over Salem as he led the Hornet defense with a team-high 10 tackles. For his efforts Walker has been named The Daily Leader Defensive Player of the Week.

Salem drove down deep inside Loyd Star territory on their opening drive, but Walker and the Hornet defense rebuffed that scoring try and then saw their team take a 40-0 lead over the Wildcats.

Athletic and blessed with good balance, Walker — who also plays soccer for the Hornets — is a piece that Loyd Star coach Brian Ford can use in a variety of positions.

Last season as a sophomore, Walker played on the end of the defensive line as he finished second on the team with 66 tackles.

This year Walker is playing linebacker, but he can also drop into coverage as his size and quickness eat up passing lanes that might appear in the middle of the LS defense.

He’s a player that has instincts according to Ford.

“Brantley does a good job of reading the offensive guard,” said Ford. “He is a sure tackler and he has the potential to put on more size and speed throughout the next year as well.”

Football is a family affair for Walker as his biological brother Bryson is a lineman on the team and senior running back Eric Birch is like another de facto member of the family.

The Walker family has seen some tough times over the last 365 days — it’s almost a year to the day that their family home was lost in a fire.

Football has been an escape for the family as they’ve rebounded from their losses — a chance to watch Brantley, Bryson, and Eric play a game they love while momentarily forgetting about the harder parts of life.

Loyd Star travels to Pisgah Friday for a 7 p.m. matchup with the Dragons.

OPOW Johnson has a career night catching the ball for Cougars

Every team needs players willing to come in and work and set an example for their younger teammates — not with pump-up speeches or shouting, but with actions.

Senior wideout Rob Johnson is one of those type of players for the Cougars. Friday night Johnson hauled in four passes for 125 yards and two scores in 43-26 win over Columbia Academy. A career night for Johnson has earned him Daily Leader Offensive Player of the Week.

Johnson is also a member of the BA tennis and basketball team and a standout student. His coach says that Johnson is the kind of player that make his job easier.

“Rob is a high character kid,” said Rushing. “He’s a yes-sir/no-sir type of guy who does everything you ask of him. Extremely coachable.”

Columbia jumped up 6-0 on BA after running back the opening kickoff for a score.

Johnson answered with a 53-yard TD catch and run from quarterback Tyler Fortenberry.

BA led 24-14 at halftime as the two teams looked to be set for another shootout, the type of game that Columbia won last season in Brookhaven.

In the third quarter Johnson further padded the BA lead with a 26-yard touchdown catch that put BA ahead 30-14.

Last season as a junior, Johnson caught nine passes for 124 yards and one score. His emergence thus far just lends credibility to the assessment that BA has one of the deepest groups of receivers in MAIS 4A football.

Rushing says the 6-foot-3, 177-pound Johnson is off to a hot start because he’s fully bought into his role.

The Cougars (3-0) take on Centreville Academy Friday night in a game played at Copiah-Lincoln C.C. in Wesson.