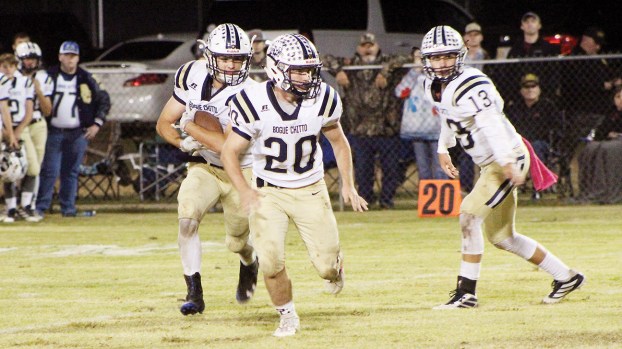 Photo by Cliff Furr Bogue Chitto heads to Perry Central tonight for an MHSAA 2A playoff game. The Bobcats are one of five area teams in postseason action tonight.

The MAIS playoffs are in round two and the MHSAA postseason for classes 2A, 3A and 4A kick off tonight as five local squads hope to keep their season going with a win tonight. All games kickoff at 7 p.m.

Coach Ron Rushing and his Cougars (7-4) are tasked with facing the second seed in the MAIS 4A bracket — Tri-County Academy — tonight in Flora in a second-round playoff showdown.

When the Cougars dropped a close battle with 4A top seed Riverfield earlier this season 20-7 — the game was 12-7 until a late Riverfield score — Rushing told his team they had proven they could play with anyone.

Tri-County (8-2) was one of those “anyone” teams that Rushing was talking about.

Riverfield is one of the two teams to beat TCA this season as they topped the Rebels 50-49.

Rushing and his young Cougars don’t want the game to be a track meet, preferring instead to try to limit possessions for what has been a powerful TCA rushing attack.

The Cobras (7-4) of Wesson are the lone team in the area to host a playoff game this week. Coach Jeremy Loy and his staff welcome the North Forrest Eagles to Stone Stadium for this MHSAA 2A first round game.

North Forrest (3-7) is coached by Anthony Dillon and comes in as the fourth seed from Region 8-2A. The Eagles have been on the wrong end of some close losses this season as region champs East Marion beat them 8-0. NF also lost by one point — 21-20 — to 1A contender Resurrection Catholic.

The hope for Loy and his crew is that the Cobra air-raid offense piles up early points and puts the game away.

Wesson freshman quarterback Will Loy has thrown for over 2,000 yards this season while tossing 24 touchdowns and just four interceptions.

The blue and gold Bobcat caravan will make the 110-mile trip in a southeastern direction to New Augusta in Perry County tonight. Coach Gareth Sartin and his third seeded Bobcats (5-6) face a Perry Central Bulldog (5-5) squad that was the runners-up in Region 8-2A.

The Bulldogs claimed second place with a tough 12-2 win over Collins and then a 20-8 victory against North Forrest over the final two weeks of the season. Their lone division loss was a 28-20 defeat to region champs East Marion.

The Bears are making history with their third straight playoff appearance, a first since the team was created just over 20 years ago. They’ll try and knock off an East Marion (7-2) program that owns multiple state championships (1991, 2006).

East Marion is a school that usually fluctuates between 1A and 2A. Last year the Eagles won the 1A state championship in boys’ basketball before moving up a classification this year.

The teams have a common opponent in the Amite County Trojans. East Marion faced AC in Liberty in the season opener and won 26-13.

Last week West Lincoln hosted Amite County in their regular season finale and were beaten 32-8 by the Trojans.

Despite being the third seed from region 6-4A the Lawrence County Cougars (6-5) make the short trip to Mendenhall (5-5) as the favorites against the Region 5-4A second seeded Tigers.

Mendenhall began the season 0-4 as they lost to Columbia by 53 in their opener and to Magee (54-0) in the Simpson County Super Bowl. The next week MHS lost 19-12 at Forest Hill and then dropped a close 22-20 matchup with Collins.

The Cougars went on the road in the first round of the playoffs last season and were outscored 38-35 at Florence.

The Brookhaven High Panthers (5-5) hope to lock up the third seed in Region 3-5A Friday night when they travel... read more