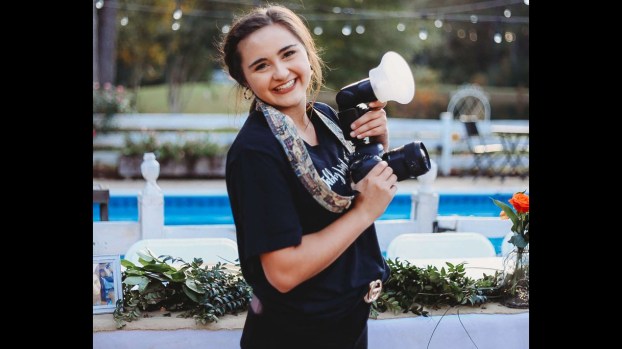 Her studio is an excellent fit for the types of photography she offers. Nestled in between the Well Dressed Man and WGK Engineers, it will be the primary location of her photography business.

The Lincoln County native began to market her new profession during the summer before her senior year of high school at Loyd Star in 2019. After gaining a lot of clientele, she realized she would soon need her own space.

“I would have to pack up all my swaddles, my backdrops — everything, and bring it to people’s houses and do it in the middle of their living room floor,” she said. “I realized after a while that I couldn’t do that anymore. And I realized I was getting enough newborns that I needed to have my own place where I could do it.”

After completing her freshman year at Copiah-Lincoln Community College, Wyant began to look for some possible studio spaces. She managed to score her current studio in just one day.

“My mom and I were peeking through windows downtown, like just seeing what was available, being nosy and stuff. We looked through the window and were like, ‘Hmm, I wonder what’s in here?’ So we did some digging around, and we figured out that the girl was about to drop her lease that same day we came and looked at it. We just put a down payment down that same day,” Wyant said.

In addition to her studio, she also has gained popularity for her greenhouse and sunflower patch.

Wyant planted her sunflower patch in March and recently just planted another one for the fall. With the help of her dad, she built a greenhouse for another unique location as well.

“We had been looking everywhere for months for glass windows, and come to find out, my grandmother had 18 of them and didn’t know she had them. It worked out perfectly,” she said.

These set-ups have helped her branch from newborn photography to weddings, seniors, family portraits, boudoir, milestones, maternity and many others. She says that newborn sessions are her most popular, but her wedding clients are also steadily growing.

Wyant will still be attending Co-Lin in the fall to graduate in December with her prerequisites in radiology. She plans to return to Co-Lin for the rest of her education while still doing photography full time.

The former students of New Sight School in Lincoln County will celebrate the 100th anniversary of the founding of their... read more