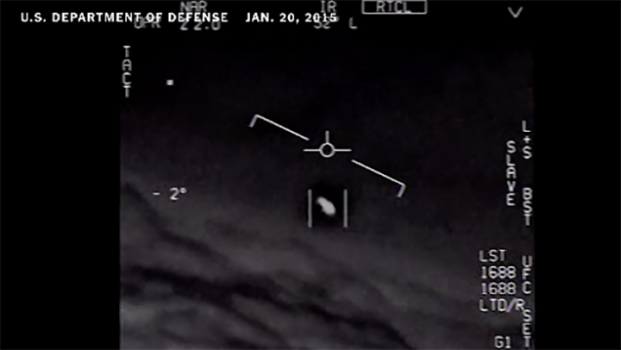 I didn’t say alien life forms are real. I said UFOs are. A UFO is a flying object that has not yet been identified.

Technically, if I glimpse out of the corner of my eye something fly toward me just before it smacks me in the head, and I don’t yet know that it was wadded-up wrapping paper thrown by my brother-in-law at me, then for just a moment it is an unidentified, flying object.

By definition, it is a UFO. At least, until I realize a moment later I’ve let down my guard and allowed Gabe to assault me at a family birthday or Christmas gathering.

But what about the traditional understanding of UFOs as flying saucers or space ships that may have alien life forms as pilots and/or passengers?

Toward the end of this past week, officials revealed publicly that a government report on sightings of UFOs found no evidence of alien activity. The report also does not rule it out.

A review of 120 incidents is expected to conclude that U.S. technology was not involved in most of these cases, but no definitive assessments are made in the report about what the objects might be, according to the report announcement. A declassified version of the report is expected to be delivered to Congress some time this month.

The report comes from a military task force established in 2020 by the Department of Defense to investigate decades of unexplained aerial phenomena and determine whether they posed a threat to national security.

So the government officially admits there are things people have seen that we still don’t have good answers for what they are.

Weird stuff happens all the time.

People who are otherwise taken credibly are seriously doubted when they reveal they have seen or experienced something supernatural or otherworldly.

That is, they are doubted by those who already doubt the existence of extraterrestrial life.

Those who believe such life exists or may exist are much more likely to believe an account of such.

The belief in aliens and alien encounters is very similar to political convictions or religious beliefs. Positions are typically strengthened no matter what “evidence” is presented, because humans in general do not like our beliefs to be questioned, challenged or changed.

Belief is built upon and reinforced by logic and reason. In other words, faith is built on reason.

I’ll tell you what I believe — Jesus is real (and He’s not from Earth), the Bible says Christ-followers are aliens to this world because it’s not our ultimate home, and things that fly that we cannot identify qualify by definition as UFOs.

I’m going go get my tinfoil hat now, because my brother-in-law may be lying in wait.

After 2 years of political unrest and pandemic, is anyone shocked over UFO reports?

Over the last two years, a global pandemic rocked the international economy and the civilized world withdrew and in great... read more