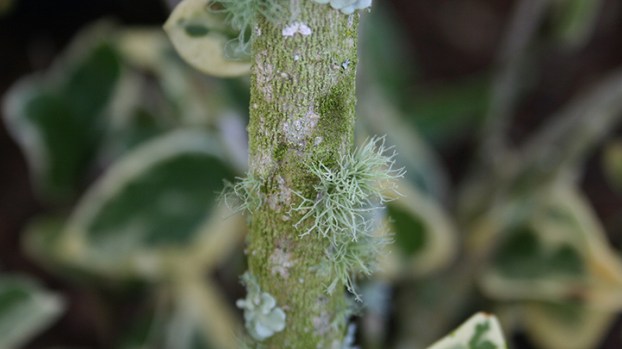 Lichen can present in several forms, and after a rain, can look like it is blooming, as small round structure appear and produce spores. (Photo by MSU Extension/Gary Bachman) Alt text -- A single upright branch has a coating of velvety green along with small, light-green clumps of fuzzy or flat growths. ###

My oldest son was not yet 3 years old when I took him to see the re-release of “Star Wars IV: A New Hope” in theaters in 1997.

We went with a friend to the movie theater that used to be located in the corner between Frontage Road and Campbell Loop in Hattiesburg. My friend and I were excited, but my son had no idea about the geekdom we were about to introduce to him.

After the commercials and preview trailers played in the theater, the screen went dark and the movie began. From overhead into the screen came a Rebel ship pursued by an Imperial Destroyer.

With all the awe of an innocent child, my son grabbed the arms of his chair and gasped, tilting his head to stare upward to see where the ships had come from. He watched the remainder of the movie with eyes wide and mouth open.

My friend and I laughed. It was awesome.

The only negative part for my boy was when the 7-foot-tall Wookie is introduced. Chewbacca gave his trademark growl and my son shook his head furiously.

Well, it didn’t take long for my son to care less and less about Star Wars, but the pure innocence and awe of that moment will stick forever in my mind, along with my delight at seeing him experience something I enjoyed.

I can only imagine how God must smile and be delighted when we react in pure awe and amazement at the power and majesty of His creation and the things with which He provides us every day.

I remember my curiosity and awe of nature — which I still have — as I walked through the woods near where I spent my teen years in Chunky. The various lichens and mosses growing on trees and mushrooms growing on fallen limbs and trunks fascinated me. The simple way a rivulet of the Chunky River pushed off into the soft sands of the bank to create a tiny, new pathway — the ever-changing river — was amazing.

Even watching the beetles and ants dismantle and distribute the bodies of a fallen blue jay or dead rattlesnake taught me that God provides for even the smallest, least seen creatures.

He cares. He is amazing.

And even as I shake my head in wonder anew thinking about these things, I can imagine His face, smiling at my amazement and delighting in my joy.

Professor Howard Ball, the distinguished political science scholar, first came into my orbit on Friday, Sept. 10, 1976, when he... read more