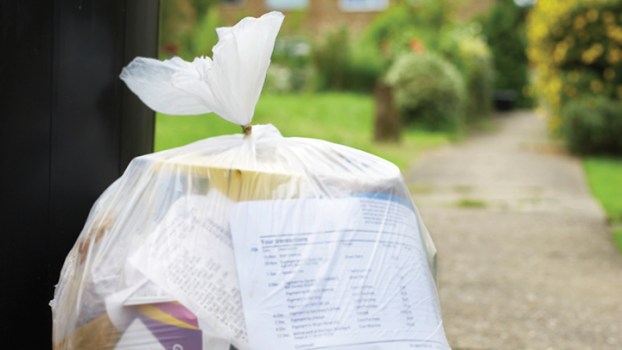 Ever sabotage yourself and get in your own way?

The trash bag was a good bit heavier than I had first believed.

I was struggling a bit to pick it up, wondering what in the world could have been in it. Then I moved my foot back to angle myself to get some leverage … and realized I had been standing on the edge of the bag.

The one thing preventing me from picking up the bag and dealing with my garbage was me.

Do you ever find yourself struggling with something, wondering why it’s so difficult when it really shouldn’t be, only to discover at some point that you were the factor that made it difficult?

We get in our own way a lot, it seems.

A couple of examples come to mind.

A friend ate an entire bag of Hershey’s kisses before his blood test at the doctor one day, absentmindedly munching away and watching television. He was oblivious to the fact that candy was “food” and that he’d been instructed to neither eat nor drink after midnight, until after his blood was drawn.

He had the medical staff in a frenzy trying to get him help for his sky-high blood sugar before it dawned on him what he’d done.

One of my offspring worked hard to complete every assignment in a high school science class, making sure he understood requirements, asking for help when he needed it and filing his assignments into his binder.

The only problem was he never turned any of them in. Once they were done, they were out of his consciousness. Thankfully, his teacher was understanding and allowed him to submit everything en masse.

Have you ever put something in a special place so you wouldn’t lose it and then forgot where you put it?

Have you bought a self-help book and never read it?

Refused to read instructions and gotten frustrated with the way something turned out? Or didn’t turn out?

For those of us who believe prayer is so important, have we talked a lot to God and not listened to whatever He might be saying to us?

Have you asked a trusted friend for advice and chosen not to apply it?

Whatever you have going on in your life today, try not to get in your own way. I’ll do the same. Our trash will be a lot easier to get rid of if we just get off the bag.

Earlier this month, a gentle, intellectual giant died and it’s likely that few among her university colleagues and friends in... read more