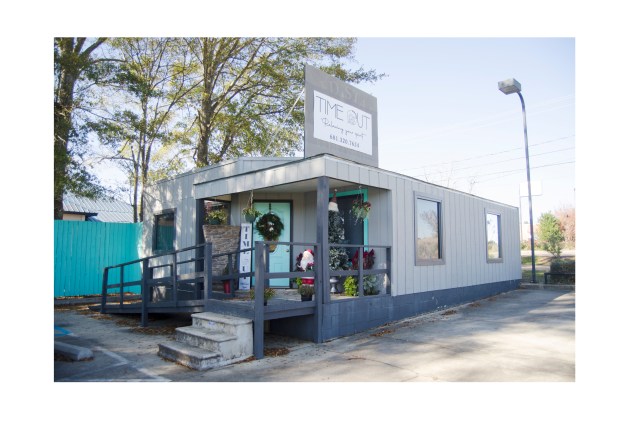 Time Out LLC is located on Hwy. 51 North.

Russell has been in business for nearly a month now, and things have gone well for her business so far. She chose to start a stress relief center due to the pandemic.

“In the times we’re in right now, that is one of the main things that I want to relieve people of — stress and anxiety,” Russell said.

Russell had seen rage rooms, but she didn’t want her business to take on the angry feeling that many of those businesses have.

“I wanted to do it in a more fun, uplifting and creative way,” Russell said.

Once Russell had her idea, she told her husband she wanted to try it. And so they did. She says it’s been good so far and that they have been well received by the community.

“We’ve had people coming in,” Russell said. “The tanning bed’s been going, and so has the break room.”

Time Out has four areas, which includes the tanning room, break room, tranquil room and meditation room. The break room allows customers to come in and break objects while wearing safety equipment.

The tranquil room has a sauna, and the meditation room is a quiet space for customers to sit and relax. Time Out also has retail items for sale such as tanning lotions, candles, hot chocolate and coffee bombs and essential oils and accessories.

Russell always has the coffee pot going for customers in need of a break. One thing she hopes to see for her business is for people to come in and leave changed.

“They can come in with one mood and leave out in a totally different mood,” Russell said.

Her favorite thing about her business so far has been the relationships she has formed with her customers.

“It’s been meeting people and being able to help them,” Russell said.

Russell said the name Time Out came from her mother.

“You’re timing yourself out,” Russell said. “If you’ve had a bad morning, you can come in here for 15 or 20 minutes and leave feeling better and be ready to back to what you were doing.”

With the pandemic, Russell knows residents will be in need of relief.

“Everybody’s scared and they don’t know what’s going to happen next,” Russell said. “It gives them anxiety. But they can come here and leave here feeling better.”

She said the purpose of her business is to ultimately help others.

“I hope they see it’s a friendly atmosphere and it’s for them to come in and relieve some stress,” Russell said. “I hope they leave here with a sense that they’ve done that.”

A Lawrence County woman and daughter of a Brookhaven Police Department officer has filed a formal complaint against BPD officer... read more