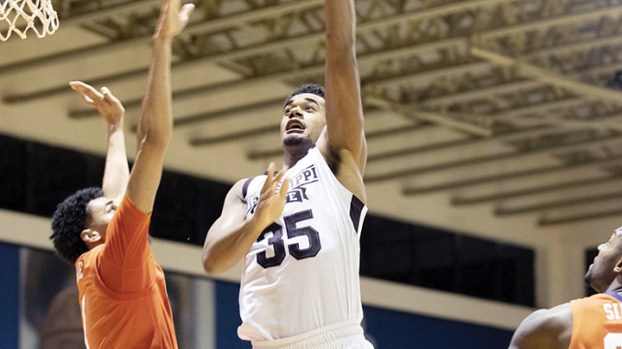 Photo by MSU Sports Info MSU forward Tolu Smith goes up at the basket against Clemson earlier this week. Smith scored a team high against Clemson and Liberty as the Bulldogs dropped both games in the Space Coast Challenge in Melbourne, Florida.

The Bulldogs are 0-2 on hardwood after opening week

The Mississippi State Bulldogs have started the basketball season with an 0-2 record for the first time since 1967 after losing both of their games in the Space Coast Challenge this week.

Wednesday against Clemson the Bulldogs struggled shooting the ball as they went 8-of-27 from the foul line and 4-of-13 from the 3-point line in a 53-42 loss.

The tournament was originally scheduled to be played in Cancun but was moved and rebranded due to COVID-19.

The location change to Melbourne, Florida, had the teams playing in a community college gym on the campus of Eastern Florida State College.

MSU committed 19 turnovers against Clemson as they started a pair of true freshmen in Cameron Matthews and Deivon Smith.

Tolu Smith led the Bulldogs with a double-double of 12 points and 10 rebounds in the loss to Clemson.

A 6-foot-10 sophomore who had to redshirt last season after transferring from Western Kentucky, Smith is a native of Hawaii who played his sophomore and junior seasons at Bay High in Bay St. Louis.

Stewart also added 12 points against Clemson and he and Smith again led State in scoring Thursday night as they each chipped in 20 points apiece in an 84-73 loss to Liberty.

MSU led 41-40 at halftime but were buried under a landslide of Liberty 3-pointers.

The Flames set a program record with 19 made 3s as guard Darius McGhee made seven by himself.

Howland will try again for career victory no. 500 when MSU is scheduled to host Texas State in Starkville on Monday, Nov. 30.

The Bulldogs are also set to host North Texas on Dec. 4 and Jackson State on Dec. 8.

UM, MSU meeting for the Golden Egg in Oxford

It’s a salve that can take away most football related pains. It’s a medicine that fans of Ole Miss and... read more