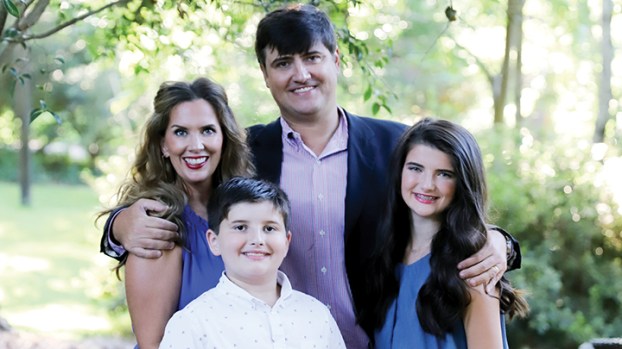 Photo submitted Brookhaven attorney Jason Barrett, pictured with wife Brandi, and their children Emme and John Henry, was elected in a runoff election Tuesday to the Mississippi Senate District 39 seat.

After the majority of votes were in for the District 39 special runoff election between Barrett and Brookhaven businessman Bill Sones, Sones called Barrett to concede the election and offer congratulations.

“I called Jason and conceded to him,” Sones told The Daily Leader. “I congratulate Jason Barrett and his family on winning the election tonight and I pledge my support to him in any way I can.”

Barrett said he was grateful to be elected and appreciated the support of everyone throughout his campaign.

“Thank you for the honor of electing me to serve as your next District 39 Senator for all of Lawrence and Lincoln counties, and portions of Copiah and Walthall counties. I am humbled by your support and confidence,” he said in a statement on his campaign’s Facebook page.

“Brandi and I sincerely appreciate your prayers throughout the campaign. We are thankful for everyone who gave so generously of their time and efforts, and supported us through calls, texts, social media and signs.”

A special election was scheduled to fill the Senate seat after Sen. Sally Doty resigned in July to head the Public Utilities staff.

Of the original nine candidates who qualified for the Sept. 22 special election, running without party designations, the top two vote-getters were Barrett and Sones. A runoff was conducted Oct. 13.

Sones said he was happy with the way he and Barrett had conducted their campaigns.

“Jason and I were friends before this and we’ll stay friends,” he said.

Sones thanked his supporters and said he plans to continue as an advocate for Brookhaven, Lincoln County and Southwest Mississippi.

Barrett said he remained dedicated to being “a strong and trusted voice for all, while providing fair and transparent leadership as we work together to build a better Southwest Mississippi. Thank you for the opportunity to serve you well with respect and integrity.”

“Senator-elect Jason Barrett has a young family and similar experience running a small law office. Coupled with his legal background, he will be an asset as the Legislature seeks to help our State move forward and recover from the pandemic when we reconvene in January,” Hosemann said.

Barrett told The Daily Leader he would begin reaching out to various municipal and county leaders in the coming week to ensure they work closely together to address needs within their areas.

“Certainly, I realize this will be a marathon, not a sprint, and that there will always be more work to be done,” he said. “However, I believe this is a good place to begin.”

Respect and integrity are essential to his Senate service, and he is dedicated to being a strong, trusted voice for all people, Barrett said.

“I will always be accessible to listen and help our residents and officials with their concerns and needs,” he said. “Politics is not for the faint of heart. I ask for your prayers as I prepare for and begin the new legislative session.”

Barrett is a family law, city, county and youth court attorney, and small business owner. He is married to the former Brandi Edwards of Monticello. They have two children, Emme and John Henry. They currently reside in Brookhaven, but have lived in both Lincoln and Lawrence counties. They are members of Heucks Retreat Baptist Church and former members of Bethel Baptist in Monticello.