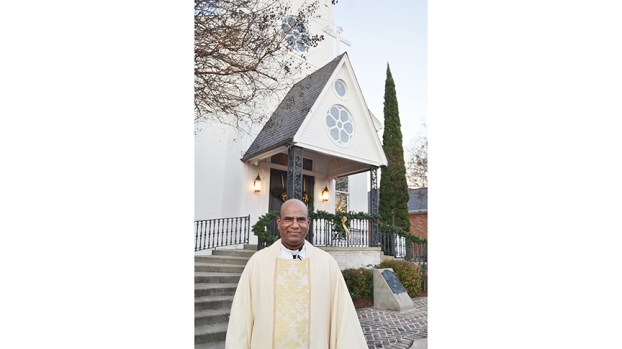 Know your pastor: Priest wants to reach everyone

Years before he became the priest at St. Francis of Assisi Catholic Church in Brookhaven, Father Mano Thanugundla was miles away in his homeland of India.

He had earned three bachelor’s degrees and a master’s degree and none of his fields of study were related to ministerial work.

“I never ever expected that I would become a priest,” he said.

Thanugundla was about to finish completing a college degree when he attended a one-day prayer service.

He recalls a Catholic priest saying “God has given us everything: human form in his own image, parents, family, siblings, relatives, friends, health, wealth…”

Thanugundla began to think about God’s sacrifices and any sacrifices he had made for God. He also wondered if he should sacrifice his life and become a disciple as a priest.

“Then I reflected on my life and decided to become a priest to work in his vineyard to continue his ministry,” he said.

His hometown, some 9,000 miles from Lincoln County, is Warangal, Telangana, a state in the southern part of India.

Officially, he is Rev. Vijaya Manohar Reddy Thanugundla, or Rev. Manohar Thanugundla for short, but he likes to be called Father Mano.

He grew up in a family of faith and was ordained in 2005.

Before leaving India, he worked as a pastor, a school principal and an associate college principal.

He moved to the U.S. in mid-2018, and was at St. Francis in Madison and administrator at St. Peter’s (now St. Francis) in Grenada before moving to the Brookhaven church at 227 East Cherokee St. He offered his first Mass here in January 2019.

His goal since then is to reach people in the community, especially “those who are in despair, those who have lost faith and hope.”

Thanugundla said his church family is one family, called the Family of Francis, or FF.

He listed many reasons he loves his church family and the love they show toward him: their love and affection; care and concern; respect and reverence; God-fearing and faithfulness; obedient and responsible; and their sacrifices and service-mindedness to the community.

Thanugundla said he also loves his staff — Christine Fiorella (church secretary) and Sue Junkin (the bookkeeper) — and “the family atmosphere where I forget my own family and people from India with the love of FF.”

He aims to always show love and to be an example of living a prayerful, faithful life.

His favorite Bible verse is Jeremiah 1:5: “Before I formed you in the womb I knew you, before you were born I dedicated you, a prophet to the nations I appointed you.”

The rate of coronavirus cases appears to be dropping as Mississippi prepares for the fall season. On Friday, the Mississippi... read more