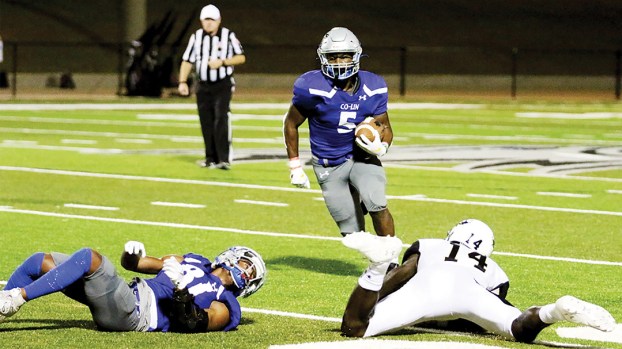 Photo by Co-Lin Sports Information Copiah-Lincoln freshman running back Drexlan Allen carries the ball Thursday night against East Central. The Wolves are on the road next week as they travel to Hinds to play the Eagles in Raymond.

The loss drops the team to 3-3 overall and to 1-2 in MACJC South Division play, while the Warriors improve to 4-2, 3-0 on the year. The loss is Co-Lin’s first to East Central since 2008, a 10-game streak. The Wolves are back in action Thursday, as the team travels to Raymond to take on Hinds. Kickoff is set for 6:30 p.m. a

Co-Lin got the ball to start the game and manufactured a great opening drive that was highlighted by 42-yard scamper from sophomore JJ Jernighan that put the Wolves deep in East Central’s territory. After some incompletions, the Wolves were forced to attempt a field goal that was blocked by the Warriors. East Central took possession at their own 24. ECCC running back JD Martin broke the Warriors’ drive wide-open with a 53-yard run to the Wolves’ 15-yard line. Co-Lin’s defense made a great stand with their backs to the endzone and held the Warriors to a 30-yard field goal from Robens Beauplan.

After back-to-back punts, Co-Lin took over at their own 19. The drive started with a bang as Danny Clark hit Dawson Brown for a 25-yard gain. Later in the drive, Clark connected with Erick Rogers on back-to-back plays for 10 and 18 yards to put the Wolves at ECCC’s nine-yard line. Freshman running back Drexlan Allen capped off the impressive drive with a nine-yard touchdown run. The point-after attempt was tipped at the line and missed making it 6-3 Co-Lin with 1:49 remaining in the first quarter.

On East Central’s ensuing the possession, the Warriors put together a nine-play, 67-yard scoring drive. Holman Edwards, East Central’s quarterback, hit Depodray Coburn for 20-yards and Jalen Jones for 19-yards to get the drive started before Martin broke another big run, this time a 25-yard gain to Co-Lin’s eight-yard line. Once again, Co-Lin’s defense held strong deep in their own territory and held the Warriors to a field goal from 20-yards out. With 12:37 remaining in the first half, the game was tied at 6-6.

Co-Lin had a solid drive on the next possession, but the drive was cut short by a Warrior interception at ECCC’s four-yard line. Co-Lin’s defense stepped-up and forced a three-and-out that resulted in a short field as the Wolves took over at ECCC’s 46-yard line after the punt. The Wolves capitalized on the opportunity and inched their way down the field. The team put together a 12-play, 46-yard drive that ate up nearly six minutes off the clock. The drive was capped off by a two-yard halfback dive from Co-Lin’s Lakenith Thompson. Co-Lin went for two following the touchdown but failed. With 2:21 remaining in the half the Wolves led 12-6.

East Central marched down the field in the last two minutes of the first half with a big play from Edwards. The signal-caller hit Jaylen Zachery for a 36-yard gain to put the Warriors in the redzone. For the third time in the half, Co-Lin’s defense buckled down and forced the Warriors to settle for a Beauplan field goal, this time from 27-yards out. As time expired in the half, ECCC cut the Wolves’ lead to 12-9.

The Warriors got possession to start the second half and just five plays later Edwards hit a streaking Zachery for a 41-yard toss-and-catch touchdown. With the point-after, the Warriors went up, 16-12.

After several punts and a leaping interception from Co-Lin’s Treshon Cooper in the endzone, the Wolves had possession at their own 20. Co-Lin took the drive to ECCC’s five-yard line with a 29-yard rush from Allen. Unfortunately, three straight sacks ended the drive with 14:07 remaining in the fourth quarter.

The Warriors took advantage of the opportunity after yet another big run from Martin, this time for 48-yards. ECCC’s Marq Qualls punched it in from two yards out to grow the lead to 23-12 with 12:31 to play.

Late in the fourth, Beauplan lined up for a field goal, but Co-Lin broke through the line for the block. Tyrus Wheat scooped up the kick and took it 78-yards for a score cutting the lead to 23-18 with 1:26 left in the ball game. The ensuing two-point conversion and onside kick failed, securing the win for East Central.

Co-Lin finished the night 300 yards of total offense, while ECCC posted 451. The Wolves had 130 yards through the air and 170 on the ground, while the Warriors had 171 passing and 280 rushing. Clark finished the night 14-of-31 through the air with one interception, while ECCC’s Edwards was 12-for-21 with one touchdown and one pick. Co-Lin’s rushing attack was split between Jernighan and Allen with 80 and 79 yards, respectively, and an additional 34-yards from Patrick Johnson. Thompson finished with three yards and a score. Martin led the Warriors with 216 yards on 23 carries. Brown and Rogers were Co-Lin’s main receiving targets on the night. Brown led the team with 57 yards on six catches, while Rogers posted 48 yards. Zachery led East Central with 81-yards and a score.

Khehlan Kennedy led the Wolves’ defense with nine tackles, while Jalen Bedell add seven and a team-best three tackles for loss. A host of Wolves finished with five tackles each including R’Tavius McGee who had two tackles for loss and Keyshawn Brinkley who added one sack.