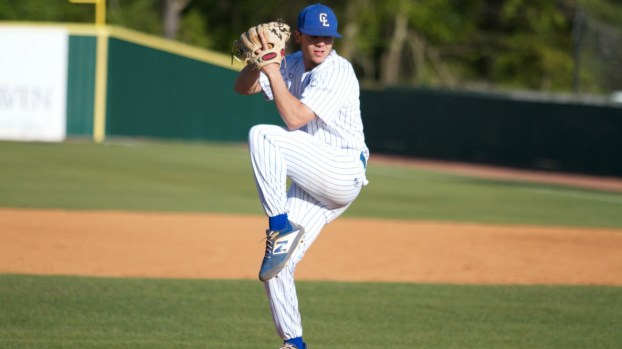 Photo by Co-Lin Sports Information Sophomore pitcher Austin Tidwell tossed a no-hitter for Copiah-Lincoln in their nightcap 5-1 win over Holmes on Monday. Tidwell is a native of Ouachita Parish and recently committed to play next season at Louisiana Tech.

A strong offensive effort in game one and a no-hitter in game two helped lift the Copiah-Lincoln Community College Wolves to two wins over Holmes Monday night.

Scoring was not a problem for the Wolves in game one as the team pushed across 20 runs on 18 hits in the seven-inning run-rule game.

Holmes led 1-0 going into the second inning after an error plated one run for the Bulldogs, but Justin Johnson got a rally started with a three-run homer early in the top of the second. Try Frierson followed later in the frame with an RBI single before Joshua Day and Kylar Fielder roped RBI doubles to quickly grow the lead to 6-1.

In the bottom of the fourth Holmes scored three after a wild pitch allowed one to cross followed by a two-run home run. The quick turn of events cut Co-Lin’s lead to just two, 6-4.

Konner Allen scratched one in the top of the fifth with an RBI single to help push the lead to 7-4.

Co-Lin had a five-run frame in the top of the sixth after Day’s second RBI base hit of the game. Thomas Slagle followed with an RBI single of his own. Allen kept the momentum going for the Wolves with a two-run bomb to left field to stretch the lead to 12-4.

The Wolves were not done yet as the team pushed across another eight runs in the top of the seventh. Frierson, Brooks Italiano and Slagle all posted RBI singles in the inning, while Mark Hubbard and Clint Stephens hit RBI groundouts. Co-Lin also got some free runs from being hit by pitch or drawing bases-loaded walks. The big inning grew the Wolves’ lead to 20-4.

Holmes got one back in the bottom of the seventh, but that was all she wrote for the Bulldogs as Co-Lin won 20-5.

Conner Ingram pitched Co-Lin to victory. He lasted six innings, allowing six hits and four runs while striking out four. Adie Goodman threw one inning in relief out of the bullpen.

Day, Allen, Frierson, Slagle and Ryan Zimmerman all posted multiple hits in the contest with Frierson and Zimmerman leading the way with four hits each. Allen led the Wolves in RBIs with four, while Frierson and Johnson posted three apiece.

The nightcap was a different type of ball game as the Co-Lin bats were not nearly as active as the opener. Austin Tidwell was brilliant on the hill, as he threw a no-hitter to lead Co-Lin to the 5-1. He surrendered one run on zero hits over seven innings, striking out six.

A Holmes error in the top of first allowed the Wolves to get on the board early in game two.

Another error scored Fielder in the top of the sixth before Allen drove in Slagle with an RBI double. Allen would score later in the frame as Johnson drove him in with an RBI single. Johnson also scored in the frame as he took home on a double-steal. The four-run inning put Co-Lin on top 5-0.

Holmes got one in on a bases-loaded walk in the bottom of the sixth, but Co-Lin held on to the 5-1 victory.

Johnson led the Wolves at the plate with three hits in three at-bats. Allen joined Johnson as the only players with RBIs, with one each.