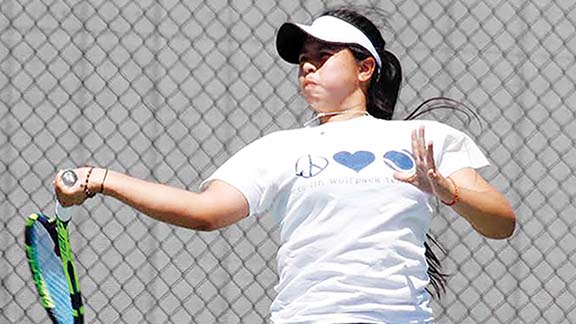 Ximina Daza of Co-Lin goes for the forehand in her MACJC/Region 23 Tournament match this season. (Photo submitted)

First year head coach Blake Smith expected a much improved women’s team after a 3-9 season in 2016. With the return of five sophomores and two internationals, experience would be a big boost for the Lady Wolves.

The Lady Wolves started the 2017 campaign with a convincing 7-2 win over East Central. Laura Vargas/Ximena Daza and Maddie Ogden/Chantel Quarles won their doubles courts to give the Lady Wolves a 2-1 lead heading into singles. The Lady Wolves won five out of six singles courts to take the win. Bayli Battle rallied from a 0-6, 0-2 deficit to defeat An Duong 0-6, 6-2, 11-9 saving a match point in the process. Maddie Ogden ended the night with a 6-3, 3-6, 10-4 over Emily Dykeman.

The Lady Wolves would defeat Holmes 9-0 and Northeast 8-1 to start the season 3-0, matching their number of total wins from last season. Heading into a big division match with Itawamba, the Lady Wolves knew the lady Indians would not go down without a fight. It had been more than a dozen years since the lady pack defeated ICC. The Lady Wolves started hot in doubles, sweeping all three courts heading into singles play. Daza, Vargas, Battle, and Ogden all picked up straight set wins in singles to give the lady pack a 7-2 win and a 4-0 start to the season.

The Lady Wolves would get into the meat of their schedule and face some tough losses to the powerhouse programs in the MACJC. Gulf Coast, the eventual state champions dominated the Lady Wolves 9-0 on March 4. Ximena Daza and Bayli Battle had the most competitive matches on the day. Daza lost to Paulina Estrada 6-1, 3-6, 10-6. Battle lost a tough match to Jenna Lyons 4-6, 6-2, 10-5. On March 8, the Lady Wolves made the trip to Ellisville to battle the bobcats from JCJC. After getting swept in doubles, the Lady Wolves got a solid win at No. 1 singles from Ximena Daza. Daza defeated Beth Owen 6-4, 6-1. Chantel Quarles would play a tough match with April Rudolph before falling 7-6, 6-4. The lady bobcats would win the match 8-1.

Jones JC would return to Wesson for a match that had been postponed earlier in the season due to rain. Coach Blake Smith stated that this was the turning point of the season for the Lady Wolves.

“We would end up losing this match 6-3, but we had our chances to win two other courts, so we could have easily won 5-4. But considering we lost 8-1 the first time, this was huge for the girls. They got the competitive bug and realized that they could play with the top teams in the state.”

Vargas/Daza got a revenge win at No. 1 doubles 9-8. Ogden/Quarles would lose a heartbreaker 9-7 after leading 7-6 and having a match point. In singles action, Daza played her best match of the season, defeating Owen 6-1, 6-2. Vargas would battle hard before falling to Buckhanova 3-6, 6-3, 10-3. Quarles defeated Brooke Cran 6-3, 6-2 at No. 3 singles. At No. 5 singles, Bayli Battle played Mattie Mills strong before falling 6-4, 6-4. Bayli suffered a 6-0, 6-1 defeat in their first meeting. Mills would go on to win the state/regional championship at No. 5 singles. At No. 6 singles, Maddie Ogden played August Parker close, taking the first set 6-3. After dropping the second set 6-3, Ogden would fall in the tiebreaker 10-5.

The Lady Wolves would go into the state/regional tournament seeded in three brackets. Ximena Daza would take the No. 3 seed at flight 1 singles. Maddie Ogden would be the No. 4 seed at flight 6 singles. At flight 3 doubles, Ogden/Quarles would take the No. 4 seed. Daza would blank Northeast in the opening round 6-0, 6-0. In the semifinals, Daza would get revenge against Paulina Estrada. Estrada, the No. 2 seed had defeated Daza in both meetings during the season. Daza would rally for the 6-2, 6-3 win. In the championship match, Daza would fall to top seed Alvarez from Hinds 6-2, 6-0. Laura Vargas defeated Bailey Gillentine at flight 2 singles 6-2, 6-3 in her opening round match. Vargas would fall in the quarterfinals to top seed and eventual champion Bianca Buie from MGCCC 6-0, 6-1. At flight 3 singles, Quarles would lose in the Quarterfinals to No. 4 seed April Rudolph from JCJC 6-3, 6-4. Ratcliff defeated Kristina Taylor from Northeast 6-2, 3-6, 6-4. Ratcliff would then fall to No. 2 seed Jasmine Sartin from MGCCC 6-0, 6-0. At flight 5 singles, Battle would fall to Jordan Warren from Hinds 6-4, 6-1. At flight 6 singles, Ogden would rally to defeat Dykeman at No. 6 singles 4-6, 6-3, 6-0. Ogden would then fall to eventual champion Micah Gray from Meridian 6-1, 6-1. At flight 1 doubles, Daza/Vargas defeated ICC’s Roberts/Gillentine 6-4, 6-1. In the quarterfinals, they would lose to eventual champions Alvarez/Varon from Hinds 6-3, 6-4. At flight 2 doubles, Ratcliff/Battle would lose a tough three set match to Northwest Johnson/Crider. The final score was 6-1, 3-6, 6-0. At flight 3 doubles, Quarles/Ogden defeated Northwest 6-2, 6-3. In the semifinals, they would fall to the top seeds from MGCCC 6-4, 6-1. The Lady Wolves would claim 10 points in the tournament and finish 5th out of 10 teams. This was a huge improvement from the 2016 season where the Lady Wolves came in 9th place. The Lady Wolves look to make huge strides in 2018. Returning sophomores will be Madison Franklin and Ximena Daza. Incoming freshman will be Carmen Manicea, an international from Madrid, Spain. Also coming in are four time state doubles champions Katy and Kara Clark, state singles runner up Ashlyn Locke and standouts from Wesson high school Maya Granger and Mary Beth Munn.

Dickerson on pace for All-Star selection