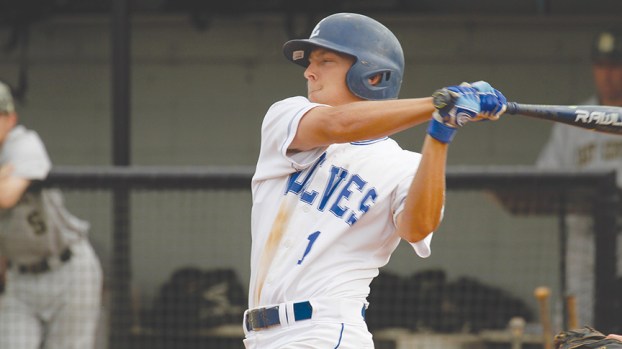 Photo submitted/Blake Estabrook of Co-Lin (1) swings at a pitch during their sweep of Holmes Saturday.

GOODMAN — The Copiah-Lincoln Community College Wolves defeated Holmes 12-7 in an 11-inning game one and 3-1 in game two on Saturday to sweep the Bulldogs in an MACJC matchup. The wins give Co-Lin a 10-10 record in MACJC play and a 16-21 overall record.

The Wolves are on the road again tonight as Co-Lin travels to Hinds to take on the Eagles. First pitch is set for 3 p.m.

Action was back-and-forth in game one as both teams hit the ball well. Holmes struck first in the bottom of the first, scoring one run.

The Wolves took advantage of wild pitch in the second to tie the game, but the Bulldogs pushed four across in the bottom half to take a 5-1 lead.

Co-Lin slowly fought back. The Wolves scored one in the fourth, two in the fifth, and three in the sixth to pull out to a 7-5 lead.

Holmes plated two runs in the bottom of the ninth off of single to tie the game yet again at seven all.

Neither team scored in extra innings until the Wolves’ bats got hot in the top of the 11th. A single from Jaylyn Williams, a sacrifice fly from Austin O’Flynn, a single from Matthew Mordecai, an error, and a steal of home gave Co-Lin a 12-7 advantage over the Bulldogs.

Co-Lin collected 13 hits in the game and were led by J.T. Wright and Williams with three each. Tyler McLeod and Mordecai finished with two each. Williams led the Wolves with three RBIs.

The Bulldogs posted 12 hits and were led by Will Jordan with three. Kyle Singleton and Brodie Threet added two hits each. Jordan and Josh Tucker led Holmes with two RBIs each.

Blake Sigrest earned the win for Co-Lin. He threw two innings, allowing zero runs, zero hits, striking out one, and walking zero. Jeb Malley took the loss for Holmes. He tossed five and a third innings, giving up five runs, four hits, and striking out three.

Game two was much slower as Co-Lin’s Christian Day struck out 11 Holmes batters and held the team to just two hits.

The Bulldogs took a 1-0 lead in the bottom of the first, but were unable to push any more runs across for the remainder of the night.

Wright hit a sacrifice fly in the top of the third to plate Kyle Whittington and tie the game 1-1.

Pitching was strong on both sides for the remainder of the contest. The Wolves scored in the top of the seventh after Mordecai bunted into a fielder’s choice and scored Wright. An error also allowed O’Flynn to score giving the Wolves a 3-1 victory.

CJ Estave led Co-Lin with two hits, while Whittington, Mordecai, McLeod, and Wright added one each.

As a sophomore transfer from Lawrence County, Shania Harris had a lot of expectations put on her to transform the... read more