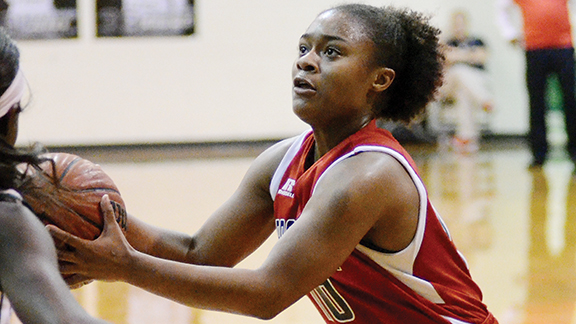 Shania Harris of Brookhaven (10) pulls up for the jumper in their playoff loss to West Jones. The sophomore point guard has been named The Daily Leader MVP for her efforts on the court for the Lady Panthers. (Photo by Dylan Rubino)

As a sophomore transfer from Lawrence County, Shania Harris had a lot of expectations put on her to transform the Brookhaven Lady Panthers.

Brookhaven went 2-14 last season and needed a boost to their program. In comes new head coach Preston Wilson and Harris to change the culture of the program, and they did just that.

The Lady Panthers started off the season slow, but finished on a high note by winning 10 of their last 13 games. Part of the great success down the stretch was due to the play of Harris, who led with confidence and swagger as the floor general and leader for the Lady Panthers.

For her performance on the court for the 2016-17 basketball season, sophomore point guard Shania Harris has been the named The Daily Leader All-Area MVP.

“Shania has a great basketball IQ. She loves the competition,” Brookhaven head coach Preston Wilson said. “She can be a major part of our improvement over the next couple of years. Her teammates feed off her intensity.”

What Harris lacks in height, she makes up for with heart and passion on the court. Standing at five feet, two inches tall, Harris doesn’t give the impression of one of the best players on the court, but her aggressive and tenacious play proves it as she leads the Ole Brook offense in points and assists.

Harris wanted the opportunity to start and play coming from Lawrence County and she proved herself worthy for Brookhaven.

“We knew it would take a minute for her to realize her fit with new teammates,” Wilson said. “We knew she would bring some intensity to our offense. She improved over the season and tried to get others involved in the offense.”

Harris is a true point guard in every sense of the definition of the position. The sophomore led Brookhaven with 14 points, four assists, three steals and three rebounds per game.

In their biggest games, Harris shined the brightest for the Lady Panthers and her improved play over the course of the season helped the team get on a hot streak to turn their season around. Harris also learned how to be a leader both on and off the court.

“She is still learning her role as a team leader, but she has the potential to be a good leader,” Wilson said. “She can be very vocal in a positive manner on the floor for us.”

The hot run for Ole Brook led all the way to the second round of the 5A state playoffs, where they ran into powerhouse West Jones after a victory over West Harrison in the first round.

The Lady Panthers led after the first quarter, but faltered after that, losing by a score of 59-38. Harris led the team with 13 points that night.

Even with seniors Asia Byrd, Cheyenne Motley and Kennedy Spiller moving on, Ole Brook returns the core of their program, led by Harris running the offense only as a rising junior.

If Harris can improve as a leader for the Lady Panthers and keep up her stellar play on the court, the sky is the limit for Harris and the Ole Brook program.

“This team could do some special things in the future,” Wilson said. “They have most definitely brought some excitement to the program and younger players are looking forward to getting to the high school to join in the excitement.”

The core of Harris, Tamia Stallings, Johnique James and Alarria Townsend should be fun to watch next season for the Lady Panthers.

Gene Britt of Loyd Star named Coach of the Year