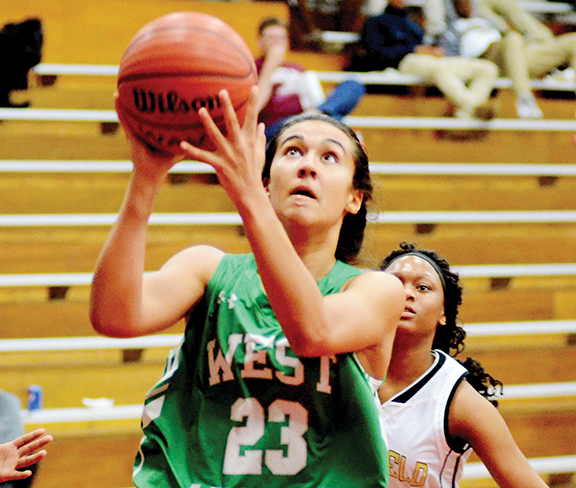 Megan Gerald of West Lincoln (23) goes in for the layup in a game earlier this season. Gerald is one of the many returning players for the Lady Bears next season. Gerald, sophomore Skylar Hall and freshman Bailey Wilson will play bigger roles in 2017-18. (Photo by Dylan Rubino)

In the opening round of the MHSAA girls state playoffs Monday night, the West Lincoln Lady Bears struggled to get points on the board and suffered a first round exit to Heidelberg by a score of 34-20.

The loss ends the season for West Lincoln, as they finished with an 11-17 overall record and 6-7 overall in district play.

It wasn’t just an offensive struggle for West Lincoln, as both the Lady Bears and Heidelberg combined to score only 54 points in the game.

The offense could not get into their rhythm all night long as the Lady Bears only made six field goal attempts for the game. West Lincoln finished the game 6-for-18 shooting from the field and 33-percent from the field, totaling their second worst offensive performance of the season. The Lady Bears scored 19 points in a loss to Brookhaven earlier this season.

The Heidelberg Oilers made a statement on offense to start the game, taking a 14-8 lead at the end of the first quarter.

When the ball was put in play to start the second quarter, both offenses stalled to say the least. West Lincoln and Heidelberg combined for one point in the quarter, with the Lady Bears scoring the sole point. The result was a 14-9 lead for Heidelberg at halftime.

Both offenses would pick up when the second half started. Heidelberg won the scoring battle 13-8 and took a 27-17 into the final quarter of play.

West Lincoln would need to break out of their scoring slump to win the game and extend their season into the next round of the state playoffs.

West Lincoln could not turn it around as Heidelberg held the Lady Bears to only three points in fourth and won the game 34-20. The Oilers advance in the 2A playoffs and will face East Marion next.

It was a disappointing end to the season for West Lincoln, but there’s plenty to be proud of. Starting the season 3-9, the Lady Bears turned it around, finishing the regular season 7-5 before the district tournament started. The Lady Bears would lose their last three games of the postseason, but were competitive in all three of the games.

Senior guard Demesha Deer is the only player graduating on the whole team, as the rest of the team is composed of sophomores and freshmen. The Lady Bears look poised to be even better next season with all of the returning players. Megan Gerald and Bailey Wilson will be the leaders of the team next season as their roles will increase with Deer graduating.

Even with the season coming to a disappointing end, there’s a bright future for the West Lincoln Lady Bears.