Volunteers and Socks for Heroes fill boxes for 800 vets 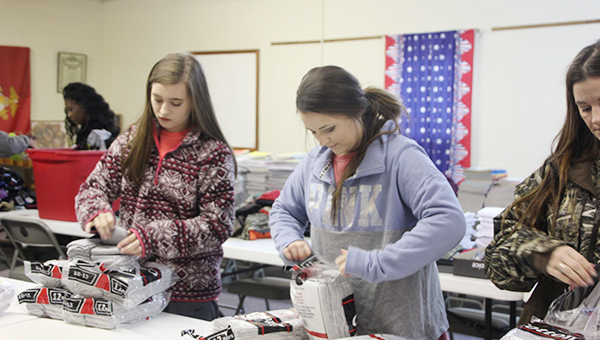 Volunteers sort through packages of socks to distribute to each veteran. The Socks for Heroes non-profit organization had more than 50 volunteers help package items to send to five veterans homes Sunday.

A room full of eager volunteers filled the American Legion building in Wesson Sunday, despite the dreary weather outside.

More than 50 volunteers from the area gathered to stuff approximately 800 packages for veterans across Mississippi and Louisiana as part of the Socks for Heroes movement.

Socks for Heroes Mississippi sprouted as an idea between two friends — Cathy Stroud, of Wesson, and Tanya Jenkins. The two women, along with a collective group of family and friends, started the non-profit three years ago.

“We just sucked everybody else in,” Stroud said previously. “We all decided we didn’t need anything for Christmas so we looked for a charity to give to.”

They decided they would give to veterans because they feel the group of men and women who served in the armed forces is often overlooked.

“Everybody has a veteran in their family, it seems like,” she said. “Some veterans don’t have family.”

The need to serve those veterans radiated throughout the room Sunday, with volunteers operating an efficient assembly line.

“Each package this year will contain seven pairs of socks,” Stroud said. “We collected more than 5,000 pairs this year. We will also include gloves, hats, a notebook, scarves, word search books, handkerchiefs, glasses cleaners, blankets, pens, anything they might need.”

Some packages may include T-shirts and underwear, she said.

In addition to the needed items, each veteran will receive multiple Christmas cards, signed by local families.

“Christmas cards are donated from all over,” Stroud said. “We like to encourage the children to make them because I think kids need to be involved and understand the sacrifices people have given up.”

Once the packages were assembled, Stroud said the volunteers would deliver them to the veterans’ homes in Kosciusko, Oxford, Collins, Jackson and Monroe, Louisiana.

John Goza, the commander of the American Legion Post 79 in Wesson and a 27-year veteran, could not believe the generosity the Socks for Heroes campaign received this year.

“I feel one group of veterans should never forget another group of veterans,” he said. “Socks for Heroes created a unified effort with the American Legion and American Auxiliary to make sure that doesn’t happen.”

Among the many volunteers lending a hand Sunday was Abi Douglas, the service coordinator for the Brookhaven High School National Honors Society, and a handful of society members.

“This summer the American Legion sent me to Girls State, and I was able to spend a lot of time with the veterans who the organization helps,” Douglas said. “Hearing about it, I just kind of developed a heart for veterans, and decided I wanted to help with Socks for Heroes this year.”

He explained that the organization provides veterans with something more than just their basic needs during the holiday season.

“They’ve got a roof over their head, three meals a day,” he said. “They’ve got medical help and what not, but the things that are supplied by this group are wants that they may not have.”

Currie said the thought behind the packages is enough to warm anyone’s heart.

“I’m just amazed at the response that they’ve gotten from all of this,” he said. “It’s just a blessing — a real blessing. It just brings tears to an old man’s eyes.”

Stroud never thought the small group of friends would evolve into a 501(c)(3) organization whose sole purpose is to make people aware of the military heroes residing in Veterans Affairs nursing homes — and to keep the veterans’ feet warm.

“The Lord is blessing Socks for Heroes,” she said. “I am in awe every day.”

Stroud said the organization collects items for the packages throughout the year, and anyone who wants to donate can contact her at socksforheroes@yahoo.com.

A customer walked in to Dude’s Hot Biscuits Monday with more admiration for the restaurant’s owner than a hankering for... read more