An attack by his dog left a local farmer with a broken nose, fractured jaw and hundreds of stitches on his face and head — and a great appreciation for his son, who he credits with saving his life.

Tommy Alderman, a local farmer who hosts the Alderman Farms Show on YouTube each Sunday, was attacked recently by his pet dog after he tried to get him away from a piglet that had escaped its pen. 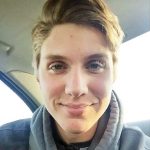 Alderman was quick to get back on his feet, writing a Facebook post describing the attack and even making an appearance on his Youtube show this weekend, where the horrific damage to his face and head was visible.

In the video, Alderman recounts the story leading up to the attack. He said he noticed one of his dogs, a 140-pound Anatolian shepherd named Duke, with the piglet and tried to call him off from a distance.

“He came and his tail was wagging,” Alderman said. “I grossly misinterpreted what that meant.”

“Had I known that, everything would have been different,” he said.

When the dog approached, Alderman did something he said would turn out to be the biggest mistake of his life. He squatted down to praise Duke. At that moment, he was approached by Duke’s 6-month-old puppy Blue, a mix with a border collie.

“That added to the dangerous chemistry,” he said. “I can’t explain it, but as soon as I squatted down, I knew I made a monumental error.”

Alderman said that he somehow knew that the moment he stood up, he would be attacked.

The ensuing struggle lasted between one and three minutes, Alderman said, but it felt like a lifetime. Blue ran off during the attack.

“God’s hand was in the situation,” Alderman said. “There was a multitude of things that needed to happen for me to survive, and it did.”

Alderman said he’d left his Polaris on, and if he’d fallen between the Polaris and the house, the sound of the engine would have drowned out his shouts. He was also able to stay calm through most of the attack.

“I’m not nearly in as good a shape as I could be or should be,” he said. “I’m just a week or two away from recovering from bronchitis. But I was never exhausted and I never felt like I was getting tired.”

It was his son who ultimately saved his life. Cory Alderman, 19, heard his fathers shouts and grabbed the handgun off the kitchen table before exiting the house.

While still in law enforcement, Alderman taught his son two things about handling a crisis situation.

“Obey your parents without hesitation or question, because asking questions could be the difference between life or death,” he said. “The second thing he remembered, when facing a threat you shoot until the threat is neutralized.”

Cory Alderman rushed to help his father, and when he was about 10 feet away, Tommy Alderman yelled to him, “Shoot it now!” The teenager did so without hesitation.

“Cory’s command of the situation didn’t stop there,” Alderman said. “Immediately, once the threat was neutralized, he came and grabbed me by the arm. He basically picked me up off the ground and hollered at his mom to get her keys.”

Tommy Alderman was bleeding heavily, and there was no time to wait for an ambulance. Instead, his wife Patti stayed on the phone with emergency dispatch as they drove toward the hospital. They would have to meet them on the way.

It took six hours to stitch up Alderman’s face and head. He posted about his experience on Facebook, and while he said there were a handful of negative comments typical of online communities, he described the volume of support “overwhelming.”

Alderman was trained in stress debriefing during his law enforcement career, and he said he made the post to help himself mentally process what had happened. But there was another consequence to the post.

Alderman was open about what he considered to be his mistakes in handling the dog. He said he should have led the dog farther away from the piglet before trying to engage him. He should have read the dog’s body language more accurately and he should have never crouched down to the dog’s level.

“Some of the (private) messages and hundreds of comments thanked me for saving their life, because they have not had an incident like I had, but they’ve noticed things like the tail wag,” he said. “That’s extremely gratifying, to know there is a very real likelihood that having shared my experience honestly and openly — admitting mistakes — has saved people’s lives.”

Alderman said that while he wouldn’t volunteer to be attacked again, the response has almost made him feel like it was worth it.

“I’m not glad it happened,” he said. “But gosh, how do you ignore people — lots of people — telling me, ‘you saved my life’? Wow. How do you process that?”

Alderman said Duke was up to date on his rabies shots, but was still being tested as a precaution. His response to the attack has been to do as much research as he can to figure out why it happened, and while he has many fond memories of Duke, some of those memories now scare him.

“I don’t know that I would ever sit down with a big dog like that again,” he said.

Alderman said anyone looking to have a large livestock guardian dog should do as much research about dog behavior as they can.

“You may love your pets, but you must never forget that they are animals,” Alderman said. “You should never fully trust them, because they are animals. There could be circumstances where they become animals, and act like them.”

Photo by Alex Jacks/Bud’s & Blooms’ employee Cherish Montgomery picks out a poinsettia for a customer. The nursery, located at... read more