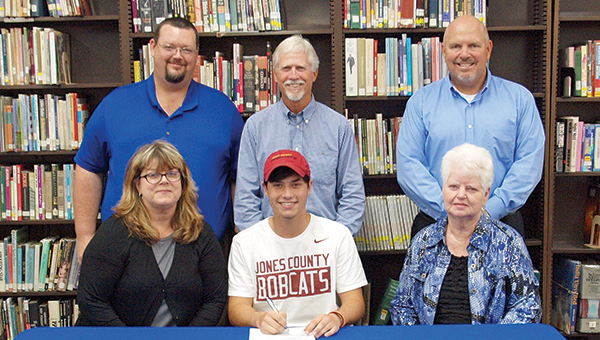 The son of Louis and Tracy Fischer of Wesson, Fischer accepted a full-tuition scholarship to play for the Bobcats. Surrounded by his friends and teammates, Fischer enjoyed signing the letter of intent.

“It’s no doubt that God led me to play tennis. Never in my life would I have thought that I would be playing tennis for a college. I’ve played tennis for three years and it has impacted me greatly. I went from not knowing anything about the sport to signing with a college,” he said.

Although Fischer has become a dominant force in area tennis tournaments and the captain of the team at Wesson, he was not always a fan of the sport.

“Erich told me when he first tried out for the team that his not making the baseball team was the only reason he was trying out,” said Wesson coach Rod Martin. “I saw it as an opportunity for him and for our team. Once I saw his athleticism and determination, I knew he had the potential to be a really good tennis player.”

As the Cobras’ top male player, Fischer has gone undefeated in regular season play for the past three seasons. Last season, Fischer earned an 8-2 record with his only losses coming against St. Andrews’ Darian Raucher and Larry Qu, both of whom ranked in the Top 30 in Mississippi in the Clarion-Ledger high school rankings of players from all classifications.