Enterprise boys, girls come out on top against Wesson 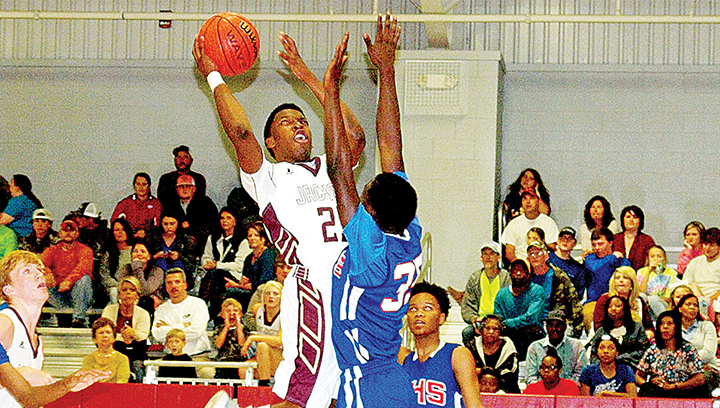 Photo by Tracy Fischer/Enterprise’s No. 23 Dwayne Pendleton goes for the net against Wesson’s No. 35 Johntavious Smith.

The Wesson Cobras and Enterprise Yellow Jackets boys’ and girls’ basketball teams faced off Friday, giving the Jackets a double victory on their home court.

The Enterprise Yellow Jackets gained a win against the Wesson Cobras Friday night with a final score of 74-58.

“I thought we played really hard tonight,” Enterprise coach Shane Adams said. “Wesson has a pretty good team and they are very athletic. Newman does a good job of coaching and we had to play a good game to have a chance of winning.  I couldn’t be prouder of the guys for working hard to get their first win of the season.”

The first quarter was a fast-paced battle between both teams to stay on top, but the Jackets took the lead at the end of the quarter with a score of 16-15. Enterprise took a slight lead and maintained it throughout the game but ended with a wide berth final score of 74-58.

Dwayne Pendleton was the top scorer for the Jackets with an impressive 25 points and also had three steals and six rebounds on defense.

Top defender was Zach Hodges with 11 rebounds for the night. Other top scorers for Enterprise were Austin Carter with 12 points and Cade Feltus and Darren Richardson had 10 points each. On free throws, the Jackets were 12 of 19.

“We just didn’t play well,” said Wesson coach Rusty Newman. “We are still trying to develop our chemistry.  We are a young team and making mistakes. We need to get back to work and try to improve to get better.”

Cobras Shemar Dickerson and JD Allen were the top scorers for Wesson with 14 points each.  JT Smith had 11 points and eight rebounds. Top defensive player was Dickerson with nine rebounds and four steals. The Cobras were 12 of 18 from the free throw line.

The Wesson Lady Cobras traveled to Enterprise Friday to face the Lady Yellow Jackets, who won the game 49-30.

“I’m proud of the girls and their effort tonight. They played all four quarters and finished with a win. We need to settle down now and start working on making shots,” said Enterprise coach Jill Nations.

The game started with the Lady Cobras getting in early foul trouble and the Lady Jackets shooting 13 out of 18 free throws by Courtney Greer, Michelle Herrington, Monisha Pendleton and Carlee Nations to pack the points on the score board. Both teams battled hard by stealing the ball from each other in the fast-paced game.

The Lady Cobras were able to fight back with shots by Alayshia Mims, Mary Allen and Nefritiria Carter but the first quarter ended with the Jackets in the lead 19-8. They maintained their lead throughout the game and finished with a winning score of 49-30.

On defense, Greer had 10 rebounds and two steals. Michelle Herrington and Monisha Pendleton both had eight rebounds each. Top stealers of the game were Nations and Herrington with five steals each.  The Lady Jackets made 17 of 30 free throws for the night.

For the Lady Cobras, Aurianna Vaughn and Mary Allen were the top scorers with seven points each. Jamiya Christmas was the top defender for the Cobras with eight rebounds and Alayshia Mims and Aurianna Vaughn had six rebounds each. Shelbi Maxwell robbed the Lady Jackets with three steals.

From the free throw line, the Lady Cobras averaged one of five attempts. “We need to learn to be consistent on defense and rebounds night in night out,” said  Wesson coach Candice McDuffey.  “We played a good game Tuesday night but didn’t have the same focus and determination tonight.  We need to not let other factors in the game determine how we play.  We missed too many lay ups and had too many turnovers and we need to correct these issues to give us a better chance to come out on top next time.”

Photo by Susan Broadbridge/Hattiesburg American/Brookhaven’s Kenneth Dixon is stopped by a host of Hattiesburg defenders Friday at Hattiesburg. The Brookhaven... read more