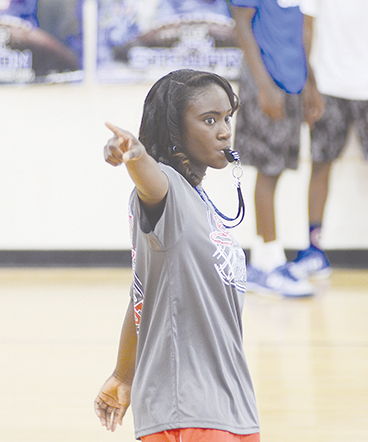 In fact, it was such a post that jumpstarted the career of Wesson’s girls’ basketball head coach Candice McDuffey.

She was approaching her graduation from the University of Southern Mississippi and decided to make a statement about the milestone on the popular social media platform.

As fate would have it, Rusty Newman, who was coaching both boys’ and girls’ basketball for the Wesson Cobras at the time, happened to see the message. McDuffey said Newman remembered her from his assistant coaching stint for the boys’ basketball team at Lawrence County High School.

“I played basketball at Lawrence County all four years,” she said. “I had all the capabilities physically, but it just never clicked for me mentally.”

After seeing the post on Facebook, Coach Newman sent her a message. It was about an assistant coaching position at Wesson.

“He told me who to get in touch with here and it went from there,” she said.

Just like that, her coaching career had begun. McDuffey spent a year in the assistant coach position, mostly observing and taking in as much information as she could from Newman and serving as the head coach of the girls’ junior high team. Slowly, Newman began to give her more freedom.

“About halfway through the season Coach Newman let me do more. He let me handle games and things like that. Being the coach of the junior high helped me out a lot, too,” she said.

When the year ended, Athletic Director Ronald Greer and the school began a search for a new girls’ head coach. McDuffey said Greer approached her about the position around April or May and her decision to take the job was a no-brainer.

She admitted she was a little nervous about running the show, especially since she would be on her own at the age of 24 with no assistant coaches.

“I liked the school, the atmosphere and the kids,” McDuffey said. “I think it’s a really good place to work. The faculty gets along well and we are there for one another.”

Furthermore, she is not the type to shy away from a challenge. McDuffey’s first full season as a head coach approaches and she said she is eager to put her stamp on this young group of girls.

More importantly, she wants the chance to grow as a coach with this group of mostly ninth- and 10th-grade hoopers. That starts with getting her girls back to playing fundamental basketball.

“Fundamental basketball is my key philosophy. The type of basketball I want my team to play is built around that. I want to build girls that play smart, physical basketball,” the young head coach said.

McDuffey added that along the way she is also learning what her coaching style is.

The coach said she makes practice difficult in order to make games less difficult for her players. And fans will not hear her yelling at the top of her lungs on the sidelines because that simply is not her style.

However, she also acknowledged that all players are not the same. Some, like herself during her playing days, use the yelling and criticism as motivation. Other players may not handle tough love as well, though, and that is something she must learn on her coaching journey.

“Different players will respond to different things. I realize I can’t be the same coach for all of them,” she said.

One thing is already clear. McDuffey truly has a passion and fire for the game. If she can instill that in her team, the Cobras may have some good times in store on the hardwood.

Photo by Lucas Calvert/Freshman Isaiah Swopes and a host of Wolves wrap up an East Central running back in a... read more