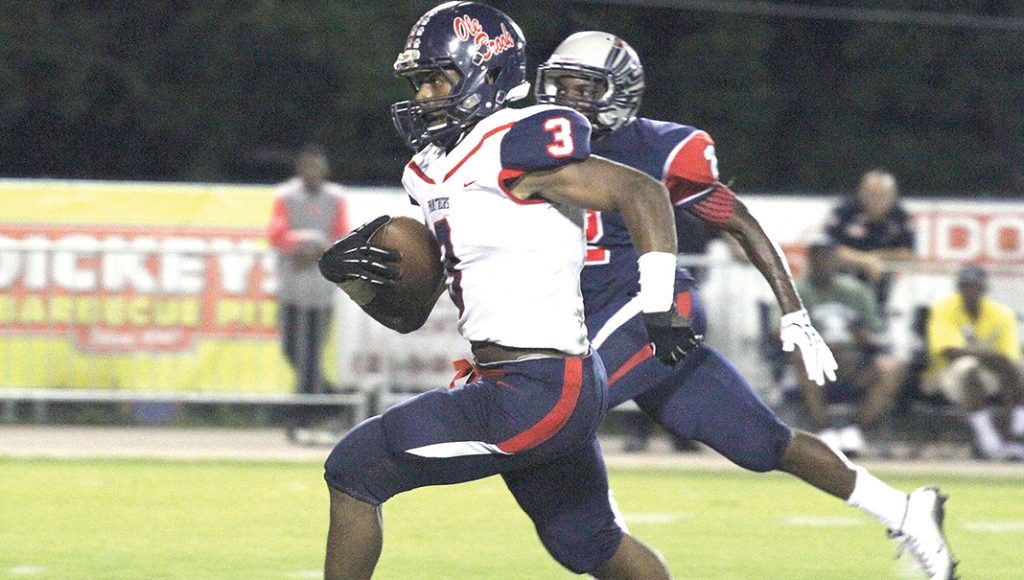 Photo by Laurel Leader-Call/Ole Brook running back Kenneth Dixon will need to continue to produce if the Panthers hope to make noise in division play.

Yet another week of high school football is in the books. The line between the contenders and pretenders in each classification is beginning to become clear. However, there are still a lot of big-picture questions that may still be unanswered for fans of area teams.

Here are the most pertinent of those questions for each of those teams.

Can Brookhaven ascend to the top of Region 3?

The Ole Brook Panthers are in easily one of the toughest districts in 5A South. However, this young team has shown great promise so far in 2016. At 4-1 overall (1-0, district) the Panthers look poised to make some noise after beating a South Jones team that some viewed as a contender in Region 3.

Now, they face a tough four-game stretch that includes defending 5A champion Wayne County and perennial contender Laurel. If there was ever a team that could unseat the two, this Panthers team is it. They have a bevy of offensive weapons and a stout defensive front. The latter could come in handy against Wayne County, as their offensive line is a young unit this year.

A win against the War Eagles this week and Laurel later will put the state on notice. Ole Brook has both of those teams at home, which should give them an edge. They may not win both, but I’m betting the Panthers get at least one victory and finish no lower than second or third in the district.

Will Bogue Chitto and Brookhaven Academy win a game this year?

The kids playing for both of these programs have exhibited a lot of fight despite the outcome of their games. The Cougars take the field with the confidence of an undefeated team and have yet to even give the appearance of a team that is reeling from loss after loss. Kudos to Coach Ron Rushing and his squad of 14 for their resiliency.

The Bobcats had a loss to Enterprise earlier in the season that was the closest they have come to a win all year. I picked them to get their first win over Salem at homecoming, but they were blown out 32-6.

Unfortunately, it will not get any easier for either team down the stretch. Bogue Chitto has the tougher road of the two, as they face two top 1A teams in Lumberton and Resurrection. Both teams will be hard pressed to find a win.

At 4-2, the Cobras are off to one of their best starts in recent memory. They have already won more games than last year, but will face their toughest test of the year Friday when they square off against the undefeated Hazlehurst Indians at home. The Indians have only had one close game this year and look to get off to a solid start to division play by beating the Cobras.

Many may deem me insane, but I think Wesson has a legitimate chance to do something special against Hazlehurst. In athletes Jermaine James and Dell Thigpen, they have the ability to spread the Indians’ defense out. The duo of quarterback Peyton Burns and wideout Will Hulon have come on as a serious big play threat as well. If the Cobras can get some stops on defense against a stout run game led by Malik Gray, they have a legitimate chance to beat the Indians.

Can Loyd Star get it together?

The Hornets are currently on a four-game losing streak, but they are far from a bad team. Three of those losses were by a combined eight points. Despite the 2-4 start, the Hornets have an opportunity to make some noise in the district. They play Amite County (1-4) in their district opener after a comeback bid fell short last week against Stringer.

If Loyd Star is to make any impact in Region 7, they must get the turnover problem in check. The Hornets are averaging around five turnovers a game in their last four losses. That is something that could cost them some big games if not handled immediately. Bassfield and Prentiss, among others, await them in division play so it is imperative they bring their best, mistake-free effort moving forward.

Is the run game enough for Enterprise?

Enterprise sits at 3-2 on the year entering district play. Their offensive success so far, as in years past, has hinged on the production of the run game.

That effort is led by quarterback Zach Hodges (405 yards) and Tanner Waldrop (259 yards). However, a solid running game is not always enough. In the college ranks, Louisiana State University and Les Miles learned that the hard way, as they were beat by Auburn and Miles lost his job as head coach.

The Yellow Jackets will face some good defenses down the line and once the run is stopped they will have to resort to the airways. If they cannot find ways to hurt teams with the passing game, they might be in some trouble in a tough Region 7.

What are West Lincoln’s chances?

There are many ways to answer that question. If one is wondering what the Bears’ chances are of winning a district game, their best opportunity would likely be against Enterprise on Oct. 21. As far as the playoffs go, West Lincoln faces an uphill battle. It is unlikely they beat Bassfield or Prentiss, and Loyd Star will prove a tough opponent for them as well.

If they can find a way to beat Amite County and Enterprise, they may be able to sneak into the playoffs.

In order to do that, they must shake off the injury bug that plagued them early in the year and improve on the defensive side of the ball. Even after fixing these deficiencies, West Lincoln fans might not see a playoff berth for the Bears this season.

Anthony McDougle is the sports editor for The Daily Leader. He can be contacted at anthony.mcdougle@dailyleader.com

Photo by Anthony McDougle/ Wesson’s Jermaine James tries to shake off a Mount Olive defender in the first half of... read more