No. 4 Co-Lin beats Coahoma despite errors 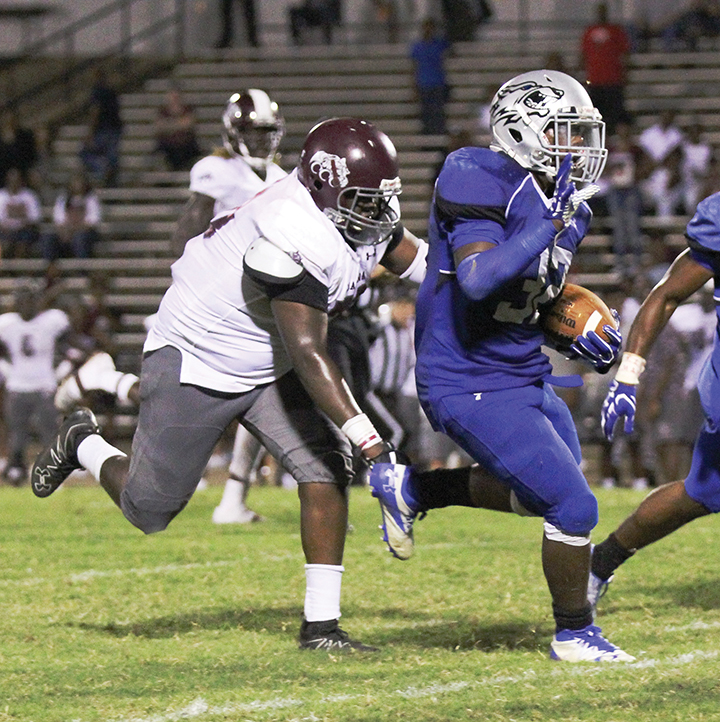 It did not go the way many may have expected it to at Stone Stadium Thursday night for Copiah-Lincoln, but a win is a win.

With solid defense down the stretch and timely play-making by star players Ladarius Galloway, Michael Graham and others, the Co-Lin Wolves were able to come away with a 26-6 victory over the Coahoma Community College Tigers.

The Wolves played sloppy for a large part of the game, which made the game much closer than the score would indicate. It was not until the fourth quarter, through clutch play-making, that Graham and Galloway would collaborate for a crucial momentum shift to put the game out of reach for Tigers.

The Tigers had just scored on a one-yard touchdown run by Rodney English to trim the deficit to 19-6 in Co-Lin’s favor. After forcing Co-Lin to punt, a mistake fielding the punt by the Wolves gave Coahoma the ball in their territory.

Enter Michael Graham. The Wolves’ middle linebacker who just last week returned an interception for a touchdown came through in the clutch yet again Thursday.

This week he made two big plays in succession beginning by sacking Coahoma quarterback Brady Burse. On the next play, he one-upped himself and stepped in front of Burse’s pass. Flashing his skills as a former running back, he made his way deep into Coahoma territory before finally being brought down.

Graham said the Tigers’ change in personnel alerted him to the pass.

“I knew when they put No. 12 in, I knew it was going to be a throw so I just tried to stay with my receiver and when he threw it, I made a play,” the sophomore said. “I knew I had to do something to give us motivation.”

Mission accomplished. He had given the offense possession, but the Wolves still needed to put the game away. Luckily for Co-Lin, a player with the same mindset is on the other side of the ball in Galloway.

He followed Graham’s lead and broke off two solid runs before finally finding daylight en-route to a 16-yard touchdown to put the score at 26-6 and seal the deal for his team. Though he had rushed the ball 10 times for only 47 yards and no scores in the first half, the running back said he knew he would find paydirt if he remained patient.

“You can’t go into life expecting things to happen immediately, you have to work and build off it. I use every play, I build off every play and know that soon it will work,” he said. “Mike made a play first and I was just trying to build off it.”

Galloway’s patience paid dividends in the long run. He finished the game with 22 touches for 106 yards and one touchdown.

The ground game proved vital to the Wolves’ success, as they found moderate success in the passing game. Co-Lin quarterback Dominic DeLira finished the night with a touchdown and 257 yards. The Tigers’ defense forced him to throw two interceptions and was also able to force a few fumbles by the Wolfpack offense.

Those, head coach Glenn Davis said, are errors that must be eliminated moving forward.

“Some of our turnovers were self-inflicted. We can’t throw the ball up for grabs. But, give them credit for playing hard and getting after us,” Davis said.

The Wolfpack head coach acknowledged that his quarterback had a rough outing Thursday night.

The Wolves will have to play better football next week if they are to beat their next opponent, Mississippi Gulf Coast Community College. The No. 17 Bulldogs fell to East Mississippi Community College 45-7 Thursday. They are the toughest team the Wolves have played so far and will require their best effort.

Galloway said he believed his team would do what was necessary to be ready for the challenge.

“We have to work on being more focused this week and not taking our opponent lightly. We need to start playing tough football from the start, because how you start is how you finish,” Galloway said.

The game against the Bulldogs will be the first road game of the year for the Wolves. Kickoff is slated for 7  p.m. in Perkinston.

Week four of high school football is week of the sleeper

In any sport there are winners, there are losers and there are sleeper teams. For those unaccustomed to this sports... read more