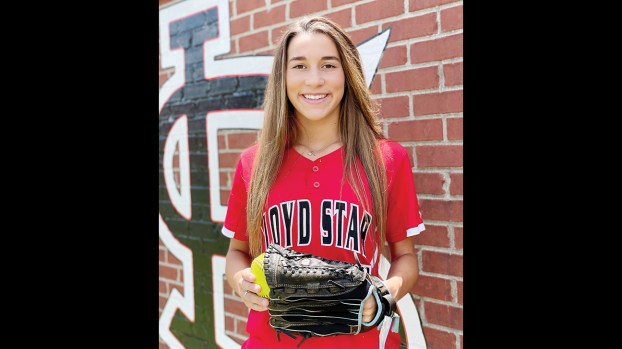 Turns out that having an elite distance runner as one of your outfielders is a pretty solid strategy for a team’s defense.

Nobody gets a better jump of the bat as Britt runs down balls hit to the outfield of Jan Smith Delaughter Field like a gazelle. For her outstanding play in the field, Britt has been named The Daily Leader All-Area Most Valuable Defensive Player.

A junior, Britt is a three-sport star for the Hornets. After cross-country season finishes in the Fall, she hits the court for the Loyd Star girls’ basketball team.

On the hardwood she was a Daily Leader-All Area selection and played in the MAC All-Star game for the best juniors in the state. She’s also been selected for the MAC softball All-Star game was well.

“Aubrey obviously has excellent speed,” said Leggett. “She’s able to cover a lot of ground and made some fantastic plays for us this year in center field. She took away several hits, some that would have for sure been doubles or triples.”

The corner outfielders for Loyd Star know they can play closer to the lines with Britt patrolling center. As her coach says, she’s got a knack for coming in on a hard charge and taking away what often look like sure hits just over the infield.

She’s also improved every season at the plate and finished with a .383 batting average this season for the region winning Lady Hornets.

“She’ll have options when it comes to what she does at the next level,” said Leggett. “She’s one of the best in the state at cross-country and I know she loves both basketball and softball — I think she could excel at any of the three.”