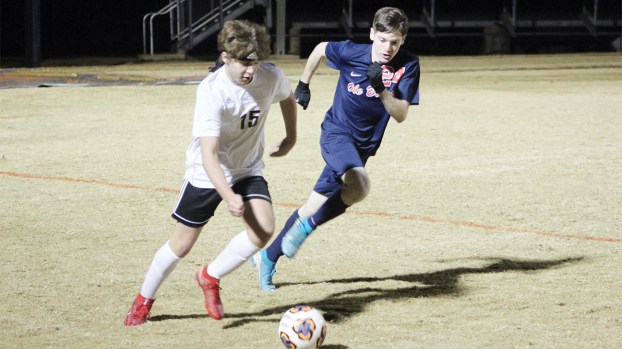 Tuesday night, the Brookhaven High boys’ soccer team looked to be in control early against Lawrence County — and then they didn’t.

The Panthers were able to assert themselves late though as they held off the Cougars for a 5-3 win on King Field that moved their record to 6-4 on the season.

The Panthers went up 2-0 quicker than you could fetch a hot chocolate from the concession stand as the senior duo of Rylan Fortado and Trace Brady scored a goal apiece in the early minutes of action.

It looked like a rout might be on as BHS had previously beaten Lawrence County 7-0 in Monticello just a month prior.

That didn’t happen though, as the Cougars clawed back into the match. A handball in the box gave LC a penalty kick that sophomore Ian Malone knocked through to make the score 2-1 after just eight minutes of play.

Ten minutes later, freshman Walker Williams further padded the Brookhaven lead when he notched a goal after a wild scramble in front of the LC net.

The Lawrence County keeper had blocked a shot as players from both teams collided in an attempt to secure possession of the rebound.

The ball ricocheted to Williams who put it into the undefended goal.

Just before half, the Cougars got another goal via a rebound of their own as a ball off the gloves of BHS keeper Bryce Smith ended with an LC score that made the deficit 3-2 at the break.

Five minutes into the second half, Lawrence County knotted the score at 3-3 via a header on a corner kick.

That would be it for the LC offense though, as the Panthers began to grind down their opponent with consisted possession in the final 30 minutes of action.

With 15 minutes remaining in regulation, Brady made a run that saw him score his second goal of the match that put his team up 4-3.

“I saw the goalkeeper come out and go near post, so I knew there would be something for me on the far side,” said Brady.

Brady used deft touch and his left foot to arch the ball over the LC keeper.

With just under two minutes remaining, the Panthers got an insurance goal from freshman Ashton Ogeltree to close the match out.

BHS coach Aaron Ayers was happy to get the win but would have preferred if his team would have been able to hold onto the momentum of their hot start. He credits an improved Lawrence County team with stopping that from happening.

“I’m really impressed with how greatly improved Lawrence County was tonight as opposed to the first time we played them,” said Ayers. “That’s a problem we’ve got to fix — this season when we face a team for a second time after beating them the first time, we don’t have the same effort. With region play starting soon, we can’t afford to have those types of letdowns.”

The 5A Panthers are in a division with Forest Hill, Wingfield and Natchez. Last season BHS beat Natchez 7-0 before losing to the Bulldogs 1-0. Forest Hill swept the Panthers to take the region title.

In the opening round of the playoffs BHS lost 5-1 to West Jones.

“Trace has really stepped up as a senior and a leader this season,” said Ayers. “He put his team on his back with that last goal and made the type of play we’ve come to expect out of him.”

Snudda is SEC Freshman of the Week once again

For the second time this season, Brookhaven High alum Snudda Collins has earned SEC Freshman of the Week honors due... read more