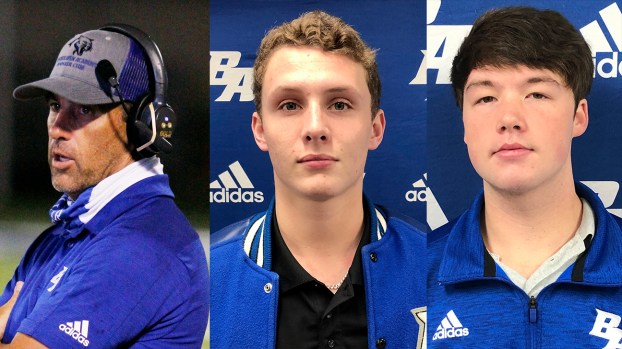 File photos / Brookhaven Academy head football coach Ron Rushing will get one more opportunity to coach seniors Gage Brown and Trey Fortenberry as the three will all be part of the MAIS 4A-6A All-Star game Friday, Dec. 4. From left, Rushing, Brown and Fortenberry.

Brookhaven Academy head football coach Ron Rushing will get one more opportunity to coach seniors Gage Brown and Trey Fortenberry as the three will all be part of the MAIS 4A-6A All-Star game Friday, Dec. 4.

Rushing is head coach of the blue team that takes on the white team at 5 p.m. on the campus of Jackson Prep in Flowood.

MRA was the 6A state championship for a second year in a row while Riverfield also won their second straight 4A title this season.

BA (8-5) finished 2020 as a MAIS 4A semifinalist for the second time in three years under Rushing.

“We’ve got a coach from Riverfield calling the offense and a coach from MRA calling the defense and I’ll be in a role of trying to manage things,” said Rushing. “There’s a limit with how much you can get put in with only three practices.”

There are 37 players on the blue team.

The white team has Presbyterian Christian running back Marquis Crosby on its roster. Crosby has run for more yards than any running back in the nation this year as he carried the ball 383 times for 3,678 yards and 34 touchdowns in 13 games.

Also on the white team is Cathedral School senior running back Bryson Moore who ran for 1,498 yards and 22 touchdowns in 11 games for the Green Wave.

Cathedral head coach Chuck Darbonne — who replaced Rushing at the school when BA hired him away in 2016 — will coach the white team.

A defensive end, Brown made a team-high 81 tackles in 2020. He also led the Cougars with four sacks.

The transformation for Brown over the last three years into being a difference maker on the edge is one that’s come as the result of hard work in the weight room.

“Gage is a guy that loves the game of football and doesn’t shy away when things get physical,” said Rushing. “He also was the type of player that never made excuses or complained about anything.”

Fortenberry is another member of the large BA senior class who put in hard work before the season to be his best in 2020.

A slimmed down Fortenberry was at his best in his final season as a tight end. He caught 39 passes for 426 yards and six touchdowns. Fortenberry also made 35 tackles on the defensive line.

“Trey is another guy who was willing to put in the time to get better,” said Rushing. “He became a real threat to catch the ball in our passing game.”

Hall of fame Copiah-Lincoln women’s basketball coach Gwyn Young has almost seen it all in his 45 years as the... read more