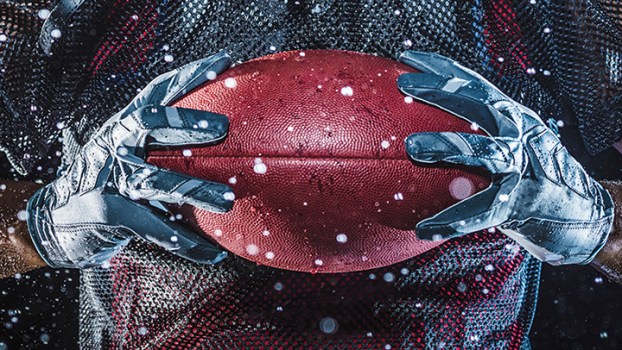 Football in the rain

The South Pike Eagles defeated the Lawrence County Cougars 26-13 in a weather-shortened Region 6-4A football game Thursday night, in Monticello.

With 8:53 left in the second quarter, Lawrence County took a 13-6 lead when freshman cornerback Kannon Cato intercepted a South Pike pass and returned it 102 yards for a touchdown. That was the final highlight of the night for the Cougars.

After that, South Pike running backs Kam Reynolds and Brandon Johnson took over the game. Taking direct shotgun snaps, either Reynolds or Johnson carried the football on 19 of the Eagles’ final 21 offensive snaps.

With 2:53 left in the half, Johnson scored on a 5-yard run, cutting the Lawrence County lead to 13-12. Moments later, after one of the Cougars’ three lost fumbles, Reynolds scored from 1 yard out, giving South Pike an 18-13 halftime lead.

On the first scrimmage play of the second half, Reynolds scored on a dazzling 49-yard run, and Johnson converted a 2-point try, making it a 26-13 game.

The two teams had played through steady rain from the outset, but midway through the third quarter, lightening sent both teams to their respective locker rooms. Conditions only worsened over the next 45 minutes, and the game was called, with South Pike declared the winner.

Lawrence County had grabbed an early lead on a 63-yard run by Quincy Lewis. South Pike’s Reynolds responded with a 13-yard scoring run.

In a game that was moved up from Friday to a Thursday start in order to miss severe weather —... read more