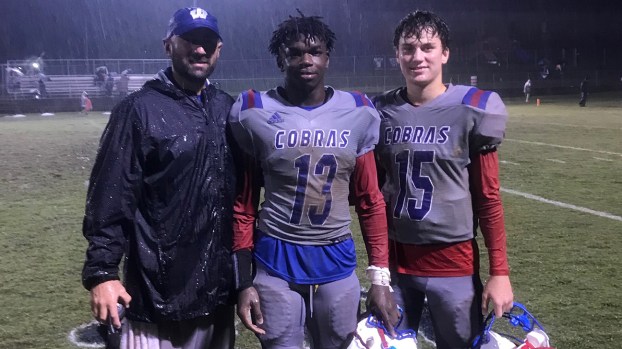 Photo submitted Wesson senior wide receiver Anterio Miller stands with Cobra head coach Jeremy Loy and WAC QB Will Loy Thursday night. Miller caught an 60-yard touchdown pass from Loy on Thursday night and will have surgery to repair a torn knee ligament on Friday morning. The game Thursday was the only one Miller was able to play this season after suffering serious injuries in a March car wreck.

Cobras make all the plays in win at Bogue Chitto

Thursday night on a wet, muddy Troy Smith Field, the Bogue Chitto Bobcats kicked off the game with a low ball that barely left the ground.

Wesson senior Orlando Smith picked up possession and ran untouched through the Bobcat coverage to put his team up 6-0 just 11 seconds into the game.

That was a precursor of things to come, as the Cobras took a 49-0 win back with them to Copiah County.

On their first offensive play, BC had a bad snap that cost the Bobcats 10-yards in the wrong direction.

The defense stiffened, though, to hold the Cobras to a turnover on downs on the first WAC possession.

Following that possession change, Bogue Chitto lost a fumble on first down that Wesson returned down to the BC 12-yard line.

Two plays later Wesson senior running back Jason Edwards scored a TD and then a 2-point conversion to make the lead 14-0.

BC was again plagued by a fumbled shotgun snap that lost huge yardage on their next drive.

Between the hashes on the river side of Smith Field was something like a shallow pond and it felt like the Bobcats kept finding themselves in the deepest part of it.

With 2:49 remaining in the first quarter, sophomore quarterback Will Loy found senior receiver Antrelle Sims on a 23-yard TD pass.

The play of the game — and most likely the season — for Wesson came on their next drive after the defense stopped a promising BC possession by making an interception in the endzone.

Senior receiver Anterio Miller caught a pass from Loy and outran the Bobcat defense for an 60-yard score.

In March, Miller was in a car accident that took the life of his younger brother — 16-year old Jakerio.

Wesson has dedicated this season to Jakerio’s honor as they keep his No. 6 jersey with them on the sideline each game.

Anterio Miller suffered serious injuries in the wreck including a broken ankle that required major surgery to repair.

The hope was for him to get healthy and cleared at this point of the season and to finish things out with his brothers on the field.

Those plans were changed this week when it was discovered that he also has a torn ACL that needed to be repaired. Surgery was schedule for Friday.

Miller made the most of his one game suited up though. You can see him running with a slight limp as he headed for the endzone — as soon as he crossed the goal line, he hit his knees in prayer.

“It was a really special moment for us as a team,” said Loy. “Anterio is a tough kid and he’s going to get through this with our support.”

Next up for the Cobras (4-2, 2-0) is a trip to Liberty to face Amite County. Bogue Chitto (2-4, 1-1) was scheduled to next play Enterprise but that game won’t happen Friday as the Yellow Jackets are in COVID-19 quarantine.

West Lincoln has announced that its Thursday night game against Enterprise has been canceled due to positive COVID-19 cases on... read more