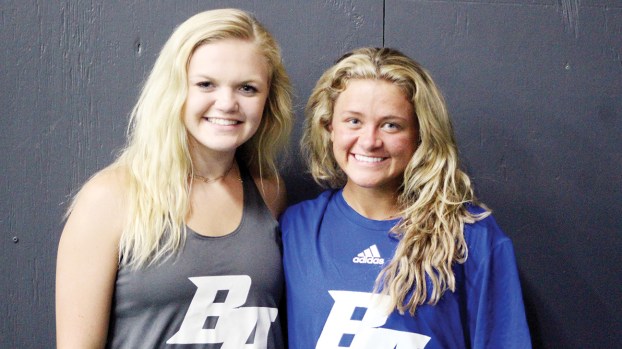 Photo by Cliff Furr Brookhaven Academy seniors Matti B. Johnson and Madi Smith will begin their final season of softball with a 6:15 p.m. matchup Friday at home as the Lady Cougars host Wayne Academy. The Lady Cougars are members of the MAIS District 4-4A along with ACCS, Cathedral, Silliman Institute and Oak Forest Academy.

A group of dedicated parents and softball supporters were at work Monday evening at Lady Cougar Ballpark on the campus of Brookhaven Academy.

They were replacing any bad boards in the bleachers and getting the concession stand ready to serve nachos and cold drinks again.

The Lady Cougars host Wayne Academy Friday in the season opener for both teams.

“The girls have been working hard since we got the go-ahead this summer that said we could begin practice,” said BA head coach Becky Flowers.

The team was taking cuts Monday evening in the indoor hitting facility they share with the baseball team. A strong downpour that morning and a later afternoon shower meant the infield was off limits for practice that day.

Flowers again trots out a veteran team as the Lady Cougars lost just two seniors to graduation in Hallie Creel and Kaylie Burgess. An infielder with a strong bat, Creel signed with Mississippi College to continue her softball career.

This season BA again has a two-person senior class in outfielder Matti B. Johnson and pitcher/infielder Madi Smith.

Smith has verbally committed to sign a letter-of-intent with the Southwest Mississippi Community College softball program.

Johnson, Smith and the fiver juniors on the team have all played some big innings in their careers. Most were starters when the Lady Cougars finished as MAIS AA runners-up two years ago to Clinton Christian.

Last season the Lady Cougars (30-8-1) joined the new 4A division as the MAIS restructured their classifications.

The 4A class appeared to be the toughest in the state on paper before the season began. BA went into the South State Tournament as the top seed out of District 4-4A before losing 14-4 to Hillcrest Christian in the second round of the tournament.

Hillcrest would later beat the Lady Cougars 6-4 in the championship game. In the state tournament the Lady Cougars beat East Rankin in the opening round before losing 7-5 to eventual 4A champion Magnolia Heights from Holly Springs.

Bayou Academy — the runners-up — eliminated BA from the tournament with a 3-1 victory over the Lady Cougars.

Flowers expects Magnolia Heights to be among the favorites again this season.

“They’re close enough to Memphis that you never know who they might get to transfer in,” said Flowers. “I’m sure Bayou will be good again and Hillcrest has a lot coming back. We’ve got the talent to beat everyone we play — for us the most important thing is our mental focus.”

That sentiment is repeated by the senior Smith when she talks about where the team needs to improve the most this season.

“It feels like we’re more locked in this season,” said Smith. “I know this is my last season of high school softball and I want to make it count.”

Smith plays third when she’s not pitching, and her bat is part of a powerful BA lineup. As a pitcher she wields a nasty changeup that is a more than effective put-out pitch.

“Madi is a bulldog in the circle,” said Flowers. “She’s not afraid to go after hitters and she’s a great competitor.”

“There aren’t many teams that have two pitchers as good as ours,” said Johnson. “Our defense is looking really strong.”

Flowers says Johnson will see time in right field and calls her hands-down one of the best teammates on the squad.

“Madi B. brings great energy and she’s always going to be the first person to congratulate her teammates when they make a play or get a hit,” said Flowers. “She’s a leader for us.”

Smith and Felder give Lady Cougars a strong 1-2 punch

As Johnson said, not many MAIS teams have the quality of pitching depth that BA has in Smith and Felder.

Smith finished 14-4 in the circle last season as she posted a 1.96 earned runs average. She struck out 90 batters in 89 innings of work.

Flowers says eighth grader Kensy Covington will pitch some varsity innings in addition to starting at first base.

At the plate last season Felder hit .355 while driving in 21runs. A Daily Leader All-Area selection in basketball, Felder finished second on the team with five home runs in 2019.

Smith slapped 12 doubles and drove in 28 runs as a junior while finishing with a. .315 average at the plate.

When a run crosses the plate for the Lady Cougars, there are fairly good odds that Bailee Goodson, Madison Moak or Abby Grace Richardson had something to do with how it was manufactured.

Richardson led the team in 2019 with a .491 average as she hit 10 home runs and drove in 46 runs. She splits time behind the plate catching and at shortstop with Goodson.

Last season Goodson was third on the team with 39 runs driven in. She also finished with a .457 average at the plate.

Moak used her speed to leg out a team high 20 doubles last season as part of her team leading 61 hits. A strong defensive centerfielder, Moak posted a .555 average last season as the leadoff bat in the lineup.

Fellow junior Anna Adams is a transfer from Wesson that Flowers expects to step in at second base.

Flowers will again be assisted by Jose Acosta this season.

“We’ve been working hard on conditioning and I think the girls are in great shape,” said Flowers. “A lot of what we’ve been doing is about competing. Competing in our conditioning work and how we want to respond in certain game situations. I think they’re looking forward to getting to compete against someone else soon.”

The varsity matchup between BA and Wayne Academy begins at 6:15 p.m. Friday.

Junior college football is coming back in the fall

Earlier this month the National Junior College Athletic Association (NJCAA) voted to move their football season to the spring of... read more