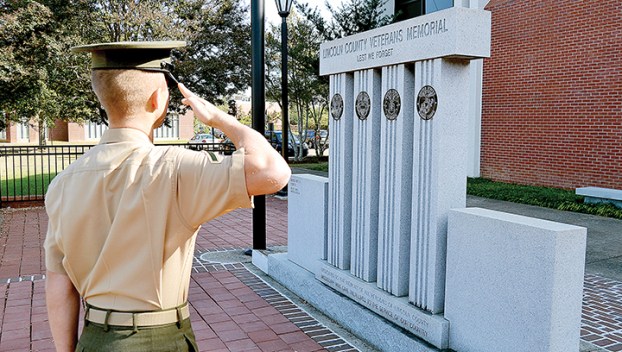 Daily Leader file photo Names of members of the armed forces from Lincoln County who died in combat or as a result of injuries received in wartime service are etched in the Lincoln County Veterans Memorial at the Lincoln County/Brookhaven Government Complex . Their names are also engraved on the 230 bricks placed in the walkway on either side of the monument.

This Memorial Day, remember them a different way

Every year, the Veterans of Foreign Wars and the American Legion join forces to host a Memorial Day ceremony in front of the Lincoln County-Brookhaven Government Complex. This year will be an exception.

“We have decided due to the current situation, we feel we should cancel the ceremony this year,” said Greg Marlow, post commander of VFW Capt. Danny D. Entrican Post 2618. Marlow and American Legion Post 12 Commander Keith Reeves agreed this was the best course of action, considering the continued fight against the spread of coronavirus COVID-19.

The VFW was founded in 1899 to support veterans who were in combat during a war fought in a foreign theater. Marlow has been involved with the VFW for six years, and is a 22-year veteran of the U.S. Army who fought in Desert Storm.

The American Legion was founded in 1919 in order to serve veterans and mentor American youth. Legion members place hundreds of small American flags on veterans’ graves each year to honor their sacrifices and their lives.  Reeves has been a member of the Legion for 39 years, and is a 6-year veteran of the U.S. Army Reserve who served in the Vietnam War. He has been a member of the Mississippi Guard for 28 years.

Memorial Day is not a day set aside to honor those who are still alive and serving in the U.S. military — or those who have served and are still living. The primary national holiday to honor the living is Nov. 11, Veterans’ Day, although there are other holidays, too — birthdays of each branch, National Day of the Deployed, Gold Star Mothers and Families’ Day, and several more. While no one would be wrong to honor these or to take time with family to enjoy the day, the primary purpose of Memorial Day is to solemnly honor the men and women who died while serving in the military.

The Lincoln County-Brookhaven annual ceremony on Memorial Day has historically involved songs, pledges, prayers and speakers. It also has always included reading the names listed on the memorial. The names are read aloud with purpose.

“A soldier dies twice,” said Marlow. “Once when he takes his or her last breath, and he or she dies again when they are forgotten.”

The complete list of the names engraved on the memorial which stands in front of the courthouse is provided below. Marlow and Reeves ask that each person or family take a few moments on Memorial Day to remember those who gave their lives in service to the United States of America, and to honor them by reading their names in reverence aloud.

The state’s Safer At Home order will continue through the final days of May. Gov. Tate Reeves extended the executive... read more