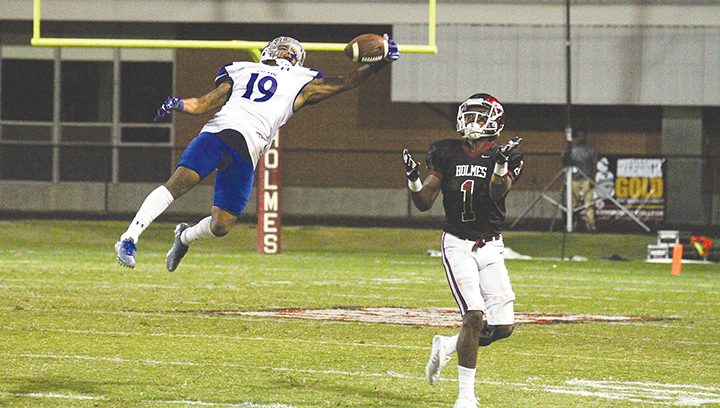 Photo by Lucas Calvert /Defensive back Paul Wilson stretches out to break up a Holmes pass during the Wolves’ 35-21 road win over Holmes lst week.

The 2016 season has been quite the roller coaster ride for the Copiah-Lincoln Community College Wolves.

From forfeiting games and losing contests many would have expected them to win, to having their way against quality opponents, the Wolfpack faithful have seen both ends of the spectrum.

This week, the fans are sure to get an exciting game as the Wolves host their archrival Bears of Southwest Community College for homecoming Saturday.

The Bears (2-5, 1-3 South)  are coming off a 47-35 shootout loss to Mississippi Gulf Coast. Southwest flashed a high-powered offense led by quarterback Neil McLaurin. The freshman totaled 247 passing yards and 145 rushing yards along with three touchdowns in the game.

He is far from the Bears’ only weapon on the offensive side of the ball, though. Wide receiver Fredrick Trevillion had three catches for 148 yards and two touchdowns last week and is sure to be someone the Wolfpack  secondary will have to keep tabs on throughout the contest.

On the flip side, the Bears’ defense, which allowed 578 yards against the Bulldogs, should be a point of exploitation for the Wolves.

The 35-21 victory was not as close as the score might indicate, as the Wolves led by as many as 29 points heading into the third quarter.

The Bulldogs’ offense was held in check for the most part by a stout Wolfpack defense that has been the saving grace for Co-Lin in many instances this season. The Wolves held Holmes to only 99 yards passing and also forced two turnovers.

However, the Bulldogs were able to use the triple option to their advantage and ripped off 250 rushing yards in the loss. The Wolfpack has shown some vulnerability to the run game at times this season and it may be something the Bears try to take advantage of in this  battle of division rivals.

Co-Lin quarterback Dominic DeLira has had his share of struggles this season, but he put on a stellar game in the victory. He finished the night with 275 yards and two scores. Star running back Ladarius Galloway had a big night also, racking up 129 yards and two touchdowns on 20 carries. The Oklahoma State transfer led all Wolfpack receivers with five catches for 74 yards.

The homecoming game, which will also observe Breast Cancer Awareness, is set to kickoff at 3 p.m. at Stone Stadium in Wesson.

Breaking records and setting new ones is nothing new to Franklin County’s Chris Robinson. After all, he holds the career... read more