She is the daughter of Cameron and Sheila King, of Brookhaven.

He is the son of Wilhelmina and Robin Reid and Charles and Rhonda Hunsucker, of Port Vincent, Louisiana. 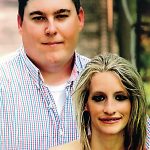 The bride-elect is a graduate of West Lincoln High School. She is currently employed with Animal Medical Center.

The prospective groom is a graduate of Enterprise Attendance Center. He is currently employed with Williams Transport.

The couple will exchange vows at 5:30 p.m., Saturday, Oct. 15, 2016, at Cooper Ferry Park in Monticello. A reception will follow at Lawrence County Civic Center.

All friends and relatives are invited to attend the wedding and the reception. No invitations sent locally.

Shining a light on childhood cancer

Photos submitted / Josh Sexton (left) and Townes Querin, below, will be honored at the 2016 Crowns for a Cure... read more